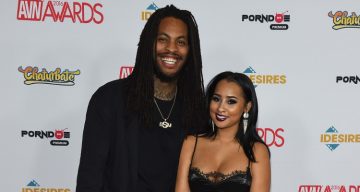 Fans of VH1’s Love & Hip-Hop: Atlanta have seen the show’s stars, Waka Flocka Flame and his wife, Tammy Rivera go through ups and downs in their relationship. Is Tammy Rivera back with her husband?

Tammy Rivera and her husband, Waka Flocka Flame have a topsy-turvy relationship. Sometimes they’re together; sometimes they’re not. While Rivera was reconnecting with her parents, fans began asking if Tammy Rivera is pregnant. The businesswoman-reality star is working on her marriage while the rapper expressed his desire to have his wife back on a recent episode of Love & Hip-Hop: Atlanta. Rivera even had a role to play in getting Waka acquitted of a gun possession charge. Find out more about the Atlanta rapper’s wife in Tammy Rivera’s wiki.

She Initially Didn’t Want to Do L&HH

The 30-year-old Rivera and her then-fiancé were in talks to join season 1 of VH1’s Love & Hip-Hop: Atlanta. But that didn’t work out because Rivera wasn’t down to do it. When L&HH was gearing up for season 3, the couple decided to jump into the show, and Rivera had quite a knack for stirring up drama between the other ladies.

Tammy Rivera reportedly negotiated $500,000 per episode to sign on for season 3 and made around $2.5 million that season. She signed a contract for later seasons that earned her around $15,000 per episode. The couples on L&HH can earn up to $250,000 per episode. The show, along with her job as a stylist and designer and her business, earned her a net worth of $200,000. The 5’6″ bodacious beauty has a clothing line called T.Rivera, geared towards curvy women. Waka has a net worth of $7 million, according to the latest reports.

Miss Jackson if you nasty ? makeup by @tlcdivo

Her Father is in Prison

Not much is known about Rivera’s early life. She was born in Virginia, but has a thick Baltimore accent because she was raised there. Very little information is available about her parents, though her mother had a brief cameo on L&HH. Reports claim her mother is African-American, while her father is of Latino descent. We do know, however, that her father is in prison.

In December last year, Rivera shared that she’s reconnecting with her father, Oscar Rivera on Instagram. Oscar has been serving a prison sentence for an undisclosed crime since Tammy was a child. Tammy posted her father’s message to her on Instagram and she mentioned in the caption, “Never knew that this man loved me sooo [sic] much, even tho[sic] all my life my mother and other family would tell me how much he loved me and how I was his only child. For 30 years he sat in prison thinking I hated him or was angry at him,,..[sic] and for 30 years all I thought was when I get in position Ima [sic] make sure he wants for nothing in there and that he has the best lawyers…”

It's been a lil over a year now that I've been getting to know my father for the first time in my life! Never knew that this man loved me sooo much, even tho all my life my mother and other family would tell me how much he loved me and how I was his only child. For 30 years he sat in prison thinking I hated him or was angry at him,,.. and for 30 years all I thought was when I get in position Ima make sure he wants for nothing in there and that he has the best lawyers.. well now that time as came… #MoneyOnHisBooksEveryMonth like clock work #FREEOSCARRIVERA Just thought I'd share a piece of me with you

Her Daughter is a Victim of Cyber-Bullying

Rivera has a daughter from a previous relationship. Tabloids claim that 12-year-old Charlie Rivera’s father is a Nicaraguan gangster, but these rumors aren’t confirmed and should be taken with a grain of salt. Waka adores Charlie and treats her as if she were his own daughter.

Tammy had posted a conversation to Instagram that she had with her daughter (and shared it with her 3.6 million followers) of when Charlie’s pet hamster died. The texts from Charlie had a few misspelled words and the innocent post about their dead pet put the tween under attack. Comments on the post attacked Charlie which angered Tammy, who reminded haters that they’re bullying a child with a learning disorder. She replied to some of the mean commenters saying that her daughter has dyslexia and Tammy paid over $27,000 to get her home-schooled when she was diagnosed.

My babe hamster died last night and she woke up to check on her..? #RIPCOCO ?

Haters can take a hike. But, they say the best medicine is revenge. The teen they attacked for her disability is now writing a book to help other children with learning disabilities! How many can say that they started writing a book when they were 12?

She Had a Unique Wedding Ceremony

It all started with their engagement. Instead of getting some sparkly bling, Rivera and Waka got their rings tattooed on their ring fingers. As if their out-of-the-ordinary wedding rings weren’t enough, they set off the “Surprise Wedding” alert.

The couple secretly got their marriage license and eloped in 2014. They made their marriage public when Rivera tweeted “Mrs. Malphurs,” referring to the rapper’s real name, Juaquin Malphurs. They kept their wedding a secret to the point that even Waka’s own mother didn’t know! His mother was a little miffed she didn’t get invited, but was happy he got married on his own terms. Though the deed was official, they had a service and celebration with friends and family later.

Mr. and Mrs. Malphurs have had a rocky marriage. Waka was a rampant cheater with many scandals. But he turned over a new leaf since Tammy entered his life. But in mid-2016, the couple separated giving way to rumors that he was cheating on her. Rivera clarified that he didn’t cheat on her and a few weeks later, they were said to be working on their marriage.

Despite their reunion, Tammy Rivera and her daughter aren’t currently living with Waka Flocka Flame. In a teaser video for L&HH, Waka said she’s living in her own townhouse and that Waka wants her back. Rivera’s Instagram has a few romantic posts in which her hubby is tagged, hinting that the couple is still together. There were also rumors that she’s pregnant with their first child when photos surfaced of what people thought was Rivera sporting a slight baby bump. They clarified that she had just eaten a heavy lunch.