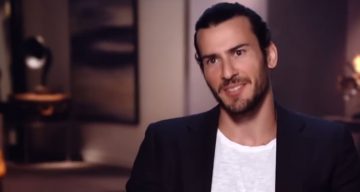 People have had a new reason to tune into Million Dollar Listing New York now that Steve Gold is a series regular. Considering his good looks, it is not surprising that he was a successful model prior to being a real estate agent. A lot of people want to know if Gold is single or married and we have the details right here.

Who is the newest TV hunk driving people wild? There are several candidates but none more sexy and handsome than Steve Gold, a successful luxury broker who is on the show Million Dollar Listing New York. Gold works at Town Residential, one of Manhattan’s top real estate agencies specializing in residential properties. He lives in West Chelsea and focuses on rich, luxurious properties throughout downtown Manhattan and has played a vital role in many prestigious new developments in Greenwich Village, SoHo, Flatiron, and the West Village. People are very curious about the handsome realtor and want to know about his personal life. Is Steve Gold married? Is Steve Gold gay? Read on to know more about him!

Getting ready to make my debut on #WWHL with the one and only @bravoandy and #RHONY star @sonjatmorgan…and I just found out my friend @brucebozzi will be guest bartending too! ??? Going LIVE at 11pm!! #MDLNY

Gold is so good looking that many people wonder if he should give modeling a shot. What they do not know is that he has! Gold was a model before he took up real estate. Before making his big career move, he had a promising career in the fashion industry where he worked with some of the world’s best designers like Ralph Lauren, Louis Vuitton, and Giorgio Armani. After Gold graduated from college, he spent a few months modeling in Japan and Europe. He then returned to New York City and realized that he was unsatisfied with his life and modeling wasn’t making him happy.

This was when he decided to enter the real estate industry. He took a real estate course, and a few months later got his license. Gold started by sending out messages and emails to everybody he knew to let them know that he had switched careers. He faced inevitable rejection early on, but he persevered. Finally, the sun broke through the clouds, and he is now a successful broker appearing in a popular TV show. Gold’s success led to the spotlight falling on his personal life. His relationship status has evoked a lot of curiosity from people who wonder if Gold has a girlfriend or boyfriend.

Waiting for the Right Girl

As of this moment, Gold is single which is good news for a lot of people! When asked about the qualities he likes in a partner Gold said, “What’s most important for me when looking for a partner is that they are genuine and have a good heart. Kindness matters, not just to me, but to other people. Does she hold the door for people? Help an elderly person? These little things show true character.”

Anyone looking for details about Steve Gold’s girlfriend should know that there is currently no information on that. What is known is that he recently split up with his ex-girlfriend, Brazilian actress Julia Faria and is busy with his career. However, Gold is ready to meet the right woman, “It’s also very important to have a connection, physically and emotionally, which I usually know very soon after meeting someone.” There’s a new guy in town, and he the good news is that he is single!