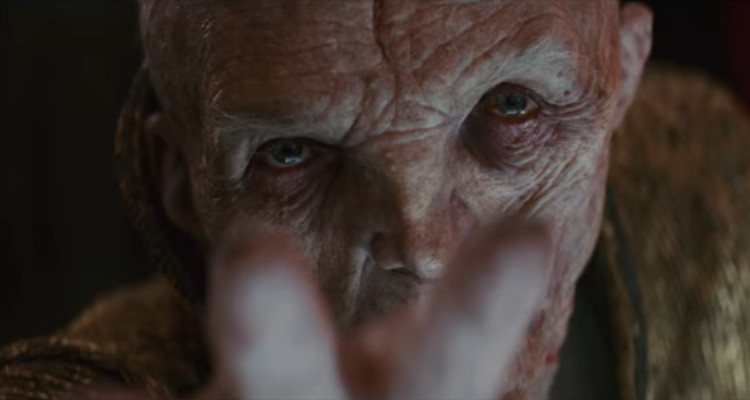 Quite possibly the most eagerly awaited film of the year is Star Wars: The Last Jedi. The good news is that it will be released on December 15, 2017, so we have just over two months left to wait! In it, fans will get their first real look at the evil Snoke.

The release of Star Wars: The Last Jedi will definitely be the movie event of the year. Star Wars fans all over the world are anxiously awaiting the release of the eighth installment of the mega-blockbuster franchise. The movie is scheduled to be released on Friday, December 15, 2017, and the first trailer is already out. In it, fans got a first, albeit brief, look of the mysterious Snoke who first appeared as a hologram in Star Wars: The Force Awakens. Since then, people are wondering who Snoke is. Though there has been tons of speculation online since the last film, people are also dissecting the new trailer to see if they can figure out who the last Jedi is. We have details about Snoke and some Star Wars: The Last Jedi theories right here.

Star Wars: The Last Jedi takes the storyline ahead from the last scene of The Force Awakens. Though the plot is still being kept secret, director Rian Johnson hinted that The Last Jedi will be a war film. He explained that the tone was influenced by Second World War classic films like Bridge on the River Kwai and Twelve O’ Clock High. He said in July 2017, “Particularly Twelve O’ Clock High, a lot of that made it in here. It ended up being a really personal part of it.”

The Last Jedi trailer raised more questions than answers. Who is the last Jedi? Johnson gave a cryptic reply to The New York Times in September, saying that the film’s title referred to Luke Skywalker but added that there would be “wiggle room” for other interpretations: “It’s in the opening crawl of The Force Awakens. Luke Skywalker, right now, is the last Jedi. There’s always wiggle room in these movies – everything is from a certain point of view – but coming into our story, he is the actual last of the Jedi. And he’s removed himself and is alone on this island, for reasons unknown.”

The Face of Evil

Another question nagging fans was the identity of Snoke and his place in the Star Wars cinematic universe. Supreme Leader Snoke, a mysterious villain, is played by Andy Serkis and will be seen in detail for the first time in The Last Jedi. Snoke is a humanoid alien who uses the Force and served as Supreme Leader of the First Order about three decades after the Battle of Endor. He is shown to have a peculiar but distinctive bone and facial structure and is a powerful figure skilled with the knowledge of the dark side. He has been around for a long time and witnessed the rise and eventual fall of the Galactic Empire. Snoke is very thin and frail, but has large hands and an elongated face with pale, scarred skin and pale blue eyes. He also has a scar on his head and what might be a burn on his left cheek that causes his mouth to be distorted.

The Scramble for Tickets

Fans are ecstatic at the upcoming release of The Last Jedi in a couple months. Tickets are already available for pre-order, and  many are scrambling to get passes for early screenings on and before Friday, December 15, 2017. Get your tickets soon!