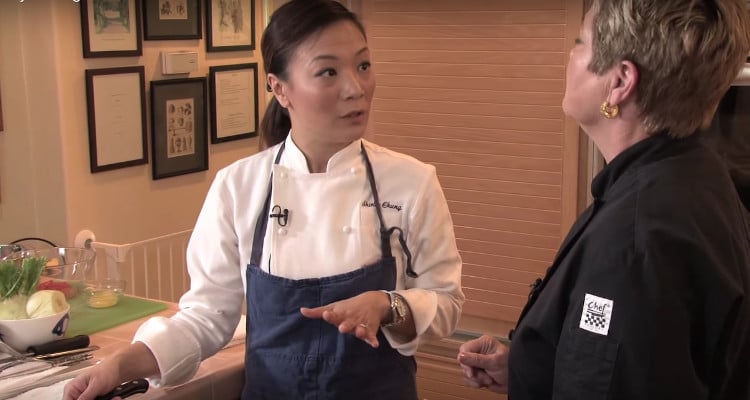 The finalists of Top Chef season 14 were Brooke Williamson and Shirley Chung. Though she did not take the win, here is everything you need to know about the talented chef in Shirley Ching’s wiki.

For the finale of Top Chef season 14, Brooke Williamson and Shirley Chung had to make a four-course meal for the judges and a full dining room. In order to help them prepare their menus, each chef had the help of the people they work with back home, and chose two former contestants to assist them in the kitchen. Shirley picked Katsuji and Casey, while Brooke picked Sheldon and Sam.

From High-Tech to Top Chef

Happy V day!! First Valentine's Day off in 11 years, @jimmywklee took me to have some pies for lunch ??????. Our tradition is buy fancy V day chocolates tomorrow, when they are all 50% off ????✌️️??❤️. #noshame #weareasians #valentinesday #happyvalentines #happyfaces #love

Shirley was born and raised in Beijing, China. The chef is 38-years-old and currently resides in Irvine, California. She was inspired to cook by her grandmother, Liang Si Yi, who was a former director of The Red Cross in China. At 17, Shirley and her family immigrated to America for college.

After getting her business degree, she worked in Silicon Valley for a few years. However, she still had a passion for cooking, so Shirley quit her job in pursuit of her dreams. She enrolled in a culinary school and has training and experience in classic French and Italian cuisine.

She Worked and Opened Restaurants for Renowned Chefs

Shirley Chung has since worked and opened restaurants for many famous chefs such as Guy Savoy, Thomas Keller, and Mario Batali. She opened the award-winning CarneVino as Chef de Cuisine for the Batali Group. She was the Executive Chef at Jose Andres’ China Poblano, which was nominated for the Best New Restaurant Award by the James Beard Foundation in 2011. Three years later, Shirley opened a restaurant in Orange County called Twenty Eight. She describes the food as being “modern American cuisine with a Chinese Soul.”

You crack me up @chfshirleychung ?

Shirley Chung was on Top Chef season 11 and made it to the the top four, along with Louis Maldonado, Nina Compton, and Nicholas Elmi. Though she did not make it to the end in season 11, she was one of the eight returning chefs in season 14 and finished as the runner-up.