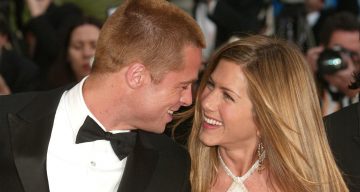 Shiloh Jolie-Pitt asked Jennifer Aniston if she could call her “mummy” after they spent time bonding!

NewIdea.com has upped the gossip ante! After the painful announcement of Angelina Jolie and Brad Pitt’s separation, many bogus websites have been taking advantage of the breaking news. The Australian weekly gossip magazine claims that Brad Pitt’s daughter, Shiloh Jolie-Pitt, has been hanging out with her dad’s ex, Jennifer Aniston. And, according to the report, she even allegedly asked if she could call her “mummy!”

When Jennifer Aniston announced that she is separating from her husband Justin Theroux, the world was immediately sent into early 2000s flashbacks, and began fantasizing about the Aniston-Pitt relationship again. EarnTheNecklace is here to separate fact from fiction!

Leading magazines and sources have tried to keep fans up to date about Jennifer Aniston and Brad Pitt in the past. However, they have not been able to publish anything concrete on the celebrities.

That’s because there was nothing to report!

Aniston and Pitt have not been in touch with each other for years now. And it appears that they are not about to start in the near future, either.

The couple tied the knot in 2000. They were married for five years before they announced they were splitting.

It was sensational news, as Pitt and Aniston were America’s sweethearts at the time. But soon enough, their fans moved on, as did the estranged husband and wife.

Now that the Hollywood actors are both single, people are spinning all kinds of tales around their lives. And the news about Brad Pitt and Jennifer Aniston hanging out together is nothing but rumors!

The Australian magazine claims that a source revealed Aniston and Pitt have been spending time together after their respective separations, rekindling their romance. And they even reported that joining them was 11-year-old Shiloh Jolie-Pitt!

Angelina Jolie’s daughter was also reported to have built a special bond with the Friends actress. So, “naturally,” her next step was to call her “mummy.” Well, that escalated quickly!

Don’t Just Go with It!

The story seems to play on fans’ minds, who obviously want their favorite couple back together. But the reality is far from it.

With all the paparazzi and their endless antics today, you’d think there would be someone who would’ve spotted these two mega stars “bonding.” And yet, New Idea magazine is the only news outlet that has managed to report it on their website. Something fishy…

Neither Pitt nor Aniston’s representatives have confirmed the news about the duo suddenly “meeting up and bonding” which is also why it seems so bogus. If only things moved as fast!

And to add to all the confusion, the magazine’s website also states that they “exclusively” know how Jolie has reacted to this fake situation. They said Angelina Jolie is apparently “fuming” after she saw her family drift away from her to spend time with Pitt’s ex.

There are no authentic sources from neither party that have come forward and claimed the news, so it can safely be considered as pure entertainment and nothing more!