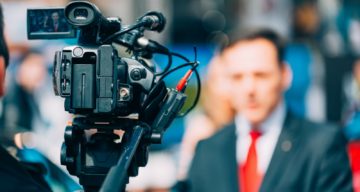 There is a reason why Scott MacFarlane is an inspiration to aspiring journalists. The NBC Washington investigative journalist and former Cox Media Capitol Hill correspondent has reported on shocking events, many concerning child safety, and other political occurrences. Many of his stories have driven changes in state laws. MacFarlane has not only interviewed presidents and congressional personalities, but has also raised poignant questions in the White House press briefing room. He is someone who deserves the spotlight in this Scott MacFarlane wiki.

Scott MacFarlane was born on September 18, 1976, and hails from New York. He grew up in Highland where he attended Highland High School.

After graduating from high school in 1994, MacFarlane studied broadcast journalism and political philosophy at Syracuse University. Before he earned his BA in 1998, MacFarlane was active in the campus radio scene.

MacFarlane and his family are currently based in Gaithersburg, Maryland. He remains connected to his hometown and alma mater, as Highland High added his name to their Hall of Fame.

During his student life, MacFarlane earned experienced in the radio industry. He was also a reporter/producer for the Syracuse TV station, WTVH.

Soon after graduating college, he began his career as a news reporter for Freedom Broadcasting of Michigan. After almost three years there, he joined WWJ-TV in Detroit.

From 2003 to 2005, he was a reporter for WOIO/WUAB. He then put journalism on hold to serve as the communications director for a U.S. House of Representatives subcommittee.


Immediately after his tenure there ended, MacFarlane began his groundbreaking work at Cox Enterprises. He was the Washington TV correspondent from 2005 to 2013, where he did some of his most noteworthy work. He’s been part of the investigative team at NBC Washington since 2013, and continues to unravel incredible stories.

MacFarlane has not only interviewed presidents, senators, and other political dignitaries, but he’s also uncovered attention-grabbing incidents. While many of his reports, especially those concerning child safety, have won awards, others have prompted state governments to revise their laws.

Lisa Hines MacFarlane is a broadcast journalism and history graduate from Syracuse. She was a news producer from 1999 to 2009, but is currently a history and journalism teacher with Montgomery County Public Schools.

Lisa also battled and beat cancer. Scott has celebrated his wife’s health milestones on social media, revealing she has been cancer-free since 2018.