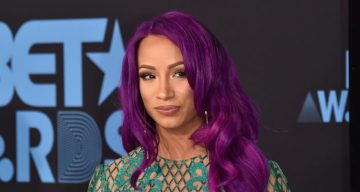 Sasha Banks is at the height of the WWE. She’s a former WWE Women’s champion and may be again if she wins the Women’s Royal Rumble this weekend. Banks is talented and gorgeous, and she’s married. So, who is Sasha Banks’s husband? Get the scoop on him in our Sarath Ton wiki below.

Who Is Sarath Ton?

Nothing better than snow fall on a cool winter day. So good to be home!!!

Ton began training in the early 2000s and made his WWE debut in 2002. Under the moniker Kid Makazi, he wrestled with numerous independent wrestling federations all around the Northeastern United States. It was during that time he met Sasha Banks.

What many people may not realize is that if you’re a wrestler on the independent scene, especially when you’re first starting out, the paychecks can be small or almost non-existent.

The other thing you need to know is that presentation is incredibly important. As an indy wrestler, your look can almost be as important as your skills in the ring.

To keep costs low and to make sure he got what he wanted, Ton began making his own ring gear. And it really stood out.

#tbt that time Antonio Thomas and I threw down at DPW. We came along way since the days in a warehouse in Chicopee.

Ton and Banks wrestled in the same area very regularly, including Banks’ home base of Chaotic Wrestling. Ton obviously noticed Banks, and when he heard she was looking for new ring gear, he stepped up and told her he could make her some.

Banks took him up on his offer. Eventually, the two began dating and are still together.

As an interesting side note, Ton and Banks have actually wrestled each other on numerous occasions.

Sarath Ton did very well in the independent circuit and was rather talented, but he could never quite get the break he needed. He even appeared on WWE television getting destroyed by then-superstar Ryback.

On the other hand, Sasha Banks ended up getting a full-fledged tryout from the WWE and signed with the company shortly afterward.

Sasha Banks and Sarath Ton packed up and moved to Florida (the home of Florida Championship Wrestling, the WWE’s training league at the time). And Ton tried to find work, preferably in wrestling.

The couple ended up working for NXT, the WWE’s wholly-owned training league and for a while. It looked like Ton would make it to the big time, and then he was injured.

He received an accidental boot to the side of the head, and went out like a light. While the wrestler downplayed it at the time, Ton did not wrestle again.

Meanwhile, Banks began to make her way up the NXT ladder. During one particular training session, Triple H (the WWE’s executive vice president of talent, live events, and creative) heard about Ton’s skills in costuming. He asked Banks about if this story was true.

As it turned out, the main costume maker for the WWE was retiring, and they needed a new one. After getting a try out making a few outfits for Wrestlemania that year, officials were impressed. And that was the beginning of Sarath Ton’s WWE career.

Still Very Much Together

Banks and Ton are still very much together, despite the fact that Banks rarely talks about him in interviews. They try to keep their personal life private.

Sasha Banks stated that online fans can be rude to her husband because she’s married to him. But the upside of their marriage and working for the WWE is that they often travel together and get to see each other on a regular basis.

Everyone help me by wishing @iammikaze a very Happy Birthday ?

However, you can still see the two interact from time to time. The couple are on the road together fairly often.

Due to the duo’s mutual love of video games, you can often see them on WWE’s Xavier Woods’ YouYube show, Up Up, Down D