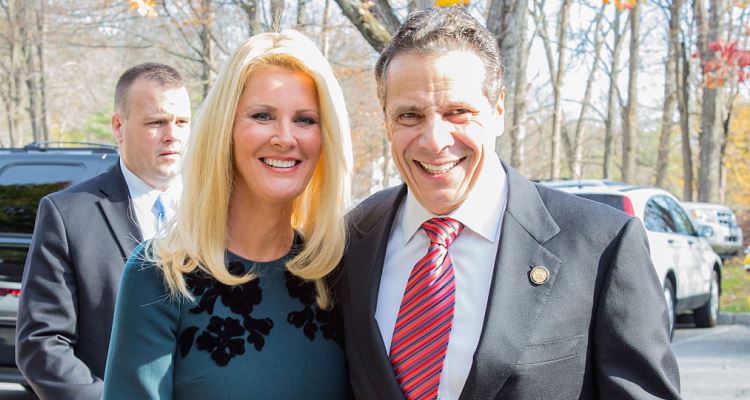 Famous TV chef Sandra Lee had a rough go of things for a good couple of years. The Food Network host and author of 25 books was diagnosed with breast cancer in May 2015 and underwent a double mastectomy. But while that should’ve been the end of it, the procedure ended up causing a massive infection that required surgery. But while that would be a lot to go through, she at least didn’t have to go through it alone: Sandra Lee’s boyfriend was there for her the whole time. So, just who is Sandra Lee dating? We’ve got the scoop!

His name his Andrew Cuomo, which should be a very familiar name for our Earn the Necklace readers who live in New York State. And while we may not be privy to the likes of Andrew Cuomo’s net worth or if he’ll one day become Sandra Lee’s husband, we still have some tidbits about the man and his relationship with the famed cook to share with you, right here in our Andrew Cuomo wiki!

At age 59, Andrew Cuomo is currently serving as the 56th Governor of the state of New York–and that’s a pretty important role! As a Democrat, Cuomo took office on January 1, 2011 and is currently serving his second term. Two of his more notable accomplishments during his time in office are improving the state’s gun control regulations and legalizing same-sex marriage.

Who does Sandra Lee date now? As mentioned, her boyfriend now is Andrew Cuomo, but that wasn’t always the case. In June 1990, Cuomo was wed to Kerry Kennedy, daughter of Robert F. Kennedy and niece of John F. Kennedy. They met shortly after Kennedy’s prior boyfriend suddenly died of a heart attack and needed comforting–not to say that Cuomo wasn’t anything but a gentleman, even if it sounds like he was just picking up a rebound!

Kerry would go on to be the mother of Andrew Cuomo’s daughters: twins, Mariah and Cara in 1995 and Michaela in 1997. They would separate in 2005 before going on to finalize their divorce later that year. The news was likely met with celebration at the Kennedy household; it was rumored that the “first family of American politics” were not very keen on Cuomo and his own bloodline.

He and Lee Live Together, and He’s Always There for Her

Sandra Lee and Andrew Cuomo have been living together since 2011 in Westchester County, New York, in a home referred to as the “Lilly Pond.” Their relationship has been especially notable for Cuomo always being–and staying–at his girlfriend’s side, in particular during the previously mentioned breast cancer diagnosis and following procedures. One noteworthy incident occurred in October 2015, when a fluid buildup caused Sandra Lee to be rushed to the hospital. Upon receiving word, Cuomo immediately left the concert he was attending–held by his personal friend, Billy Joel–to rush to the hospital to be with his beloved. He was also present for every other trip she had to the hospital, constantly leaving wherever he was to be with her. It’s pretty amazing that he finds so much time for her, especially when he also has an entire state to help run!

And it looks like they’ll have even more time together. A couple for over a decade now, Sandra Lee and Andrew Cuomo may be finally headed down the aisle after some pictures taken in April showed the celebrity chef in a wedding dress! We’ll be sure to keep you posted when we find out more!