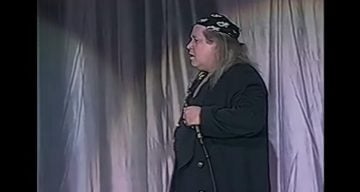 Sam Kinison was widely known for his grotesque comedy and his animal-like presence on the stage. But he was a troubled person off-stage, with drug problems like no other. Recently, Sam Kinison’s documentary titled I am Sam Kinison aired on Spike TV. It spoke about Sam Kinison’s accident and death.  So, when did Sam Kinison die? Keep reading to know more about the comedian’s life and Sam Kinison’s cause of death.

All fans of stand-up comedy have heard about Sam Kinison. However, people might not know who he was behind the curtains. Kinison had a rough comic stance no doubt, but was his past the reason for all the outburst? Get the full scoop on his life, right here.

Who Was Sam Kinison?

Sam Kinison was born on December 8, 1953, in Washington, to Marie Florence and Earl Kinison, who was a church pastor. He was a middle child and had two older brothers and one younger brother.

The Kinison family moved to Illinois when Sam Kinison was a baby, and he was just 11 when his parents decided to split up. His older brother, Bill Kinison, went with their father, and despite Kinison’s choice of living with his father, he had to stay with his mother and other brothers.

Kinison went to East Peoria Community High School. And by the time he graduated, he was following in his father’s footsteps of preaching. His older brother also had become a preacher, and the boys would do recordings of sermons like their father.

By this time, Kinison’s mother had married another preacher and she moved to Tusla, Oklahoma, where Kinison lived for a while. There, he met and married Patricia Adkins in 1975, when he was 18 years old.

Things did not work out for Kinison and Adkins, and the couple filed for divorce in 1980. After their split, things took a turn for Kinison, and he was no longer into preaching. He decided to focus on comedy instead and performed at small bars and clubs in Texas.

Kinison then joined the Texas Outlaw Comics, which was a comedic group in Texas. At the time, the group included some big names like Bill Hicks, Jimmy Pineapple, and John Farneti to name a few. Kinison had found his calling, and he decided to move to Tinseltown.

From Illinois to Los Angeles

The ’80s were a time when people wanted to see something new each day. And since landing a job as a stand-up comedian was difficult, Kinison moved to Los Angeles.

Satire and sarcasm was Kinison’s forte. And, if you were lucky enough to be in his audience, you were uncomfortable for sure. But, you would laugh till your stomach hurt!

Terry Marze came into Kinison’s life in 1981 as his second wife. But this relationship also didn’t see longevity, and the couple divorced in 1989.

So, after doing small gigs in Huston, making it big in L.A. was a dream Kinison wanted to turn into reality. But he did what he could to make ends meet and took a job as a doorman. It was during this time that Kinison developed a horrible cocaine addiction.

In the summer of 1984, Kinison caught a break with the famous Rodney Dangerfield’s Ninth Annual Young Comedians Special show.

The New York Times had said about his performance, “The most interesting of the other eight comedians is the savagely misogynistic Sam Kinison. Mr. Kinison specializes in a grotesque animalist howl that might be described as the primal scream of the married man.”

Kinison went on to perform sold-out shows across the country and even appeared in movies like Back to School.

How Did Sam Kinison Die?

Sam Kinison was in a relationship with Malika Souiri, who was a dancer in the ’90s. News broke out that Souiri was raped by a bodyguard, who was appointed by Kinison.

During the trial in court, things took a turn when the bodyguard stated that the sex was consensual. The charges were later dropped.

Kinison ended up marrying Souiri in 1992 in Las Vegas, just six days before his death. The couple were on their honeymoon in Hawaii and were scheduled to be back in L.A. in five days, as Kinison had a sold-out gig in Nevada the night they were to return home.

On April 10, 1992, on his drive to Nevada, Kinison’s Pontiac Trans Am collided with a truck, which was driven by a 17-year-old who had been drinking. The truck came into Kinison’s lane, and a head-on collision was inevitable.

Kinison’s crew, who had been traveling behind him in a car, thought that he was not badly injured at first. But after a few minutes of people trying to help him stay low, they heard Kinison talking to someone.

The comedian said, “I don’t want to die,” as if he were talking to a loved one. He even waited for an answer and paused in between, and he asked, “But why?” There was another pause as if he were receiving another answer, after which he seemed to calm down and said, “Okay, okay, okay.”

“The last ‘okay’ was so soft and at peace…Whatever voice was talking to him gave him the right answer and he just relaxed with it. He said it so sweet like he was talking to someone he loved,” said Carl LaBove, his best friend, who was close to Kinison as he died.

Sam Kinison’s autopsy revealed that he died of internal injuries. He had a torn aorta and torn blood vessels in his abdomen, which were the causes of his death within minutes of the accident.