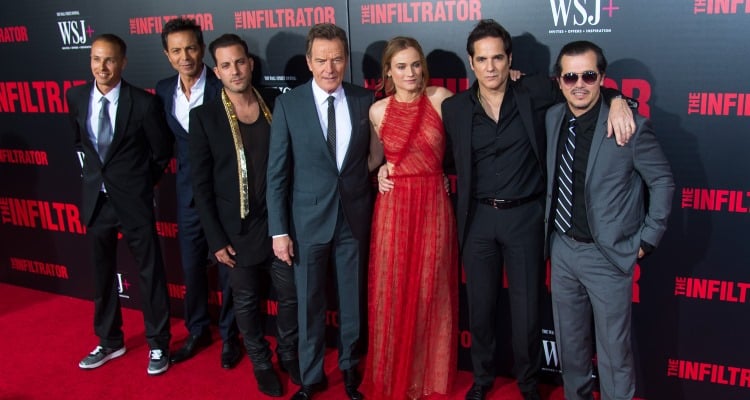 This summer, Bryan Cranston goes from drug dealer to cop as he plays Robert Mazur in The Infiltrator, released in theaters on July 13. But did you know that Robert Mazur is a real person and the film is based on his life? Yes, the story of the U.S. customs special agent who made his way into Pablo Escobar’s empire actually happened. Want to know more about the Robert Mazur true story that inspired the The Infiltrator movie? Let us serve as your Robert Mazur wiki and so that you can learn more about the man who helped take down an empire.

He Was Deep Undercover

At some point in the 1980s, United States Customs special agent Robert Mazur was able to enter Pablo Escobar’s famous drug cartel under the alias of “Bob Musella.” Through his undercover status and skill, he was able to help take down both Escobar’s money laundering organization and the Bank of Credit and Commerce International, which at the time had illegal ownership of First American Bank shares and was the seventh largest bank in the entire world.

Whether it’s because he still worries about a cartel member coming for revenge or simply out of habit, Robert Mazur makes sure to keep his identity at least partially hidden, even when making public appearances. He does not allow his picture to be taken, nor does he sign copies of the Robert Mazur book (which the movie is based on). He would only promote the book in places with enough security, and he would disguise his face and voice when doing TV interviews. From the sounds of it, he signed off on Bryan Cranston playing his role as the lead in the The Infiltrator film, even though they look nothing alike.

The Source of His Alias Is Dead

Muzar portrayed “Bob Musella” as a wealthy man who was connected to many big people in the mob, living a lavish lifestyle and spending money on only the finest goods. He picked the name from a gravestone after determining that the deceased was Italian-American and (at his time of death) close to Muzar’s age. They also shared the same initials so that helped make things easier. The scene where Mazur chooses the name almost didn’t make it into the film but Cranston insisted it remain in the script, citing its importance.

He Worked on the Film about His Own Life

Mazur served as a consultant during production of The Infiltrator at the request of director Michael Mann, who was first inspired the Robert Mazur book The Infiltrator after telling Mazur his story would make a great movie. Apparently, he is very happy with how filming went, especially with his choice in cast. He has often praised Bryan Cranston in interviews and on social media and has even had Cranston over for dinner once! He also spoke well of Cranston’s costar Benjamin Bratt, calling both of them “phenomenal actors” who “have great chemistry.” Hopefully Mazur will be pleased when he sees the box office gross, as well!

He’s Still at It

To this day, Robert Mazur still works to stop money laundering, even though he’s probably earned retirement several times over. He speaks to law enforcement agencies about money laundering and techniques needed to stop and apprehend the ones responsible. He also speaks at forums and other venues about financial crime, providing information and explanations on some unpleasant facts about the related risks while presenting his own take on situations the authorities face. On the Robert Mazur Facebook page, he wrote that, “The mission here is to spread the word and try to help people to do the right thing.”