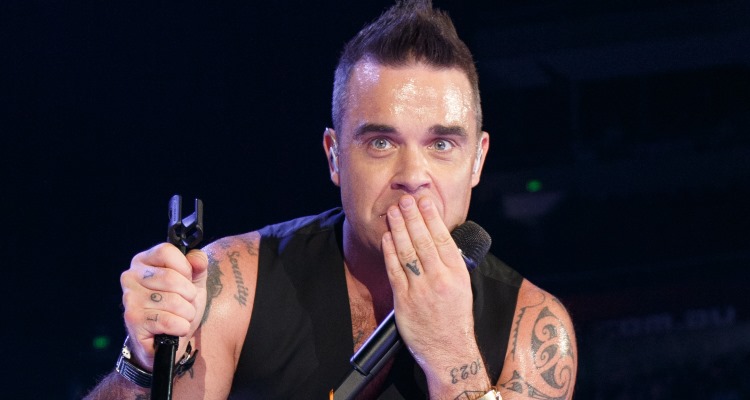 Robbie Williams’ family keeps him grounded, as he told BBC Friday, September 30. He said he is not likely to “fall off the rails” again after his struggle with depression and substance abuse in his ‘30s. He believes having a family “focuses the mind.” Williams told Chris Evans’ Radio 2 Breakfast Show that before his wife and children, his career was just a job, “It was trying to fill in all the blanks that were in the soul. And that didn’t make sense. I got to the top of the mountain and it was like, ‘Ow, I’m still in pain’.” Now he believes his life makes sense. He said, “My wife depends on me, my kids depend on me.” Clearly, Robbie Williams’ wife, and Robbie Williams’ children are his foundation. For more information on Robbie Williams’ son, daughter and wife, here’s the scoop.

He’s Married to an Actress

Known for her role on the NBC soap opera, Days of Our Lives, Robbie Williams’ wife is Ayda Field Williams, a Turkish-American film and television actress. At 37 years old, she has also performed in several comedy roles. Earlier this week, Williams expressed how proud he is of his wife’s successful career, after she took a break to help him during his travels. He told The Sun,

“The biggest reason I fell in love with Ayda is because of her personality. I’m incredibly proud of her and I’m not only in love with her but I really like her. And I want her to be out there, and I want people to be experiencing what I’m experiencing, because it’s unique what she’s got. I’m like a proud parent, even with the wife. I’m like, ‘Go out there and shine, my love.’”

In an interview with Hello Magazine in early March 2016, Field shared, “He’s really good with the kids—he changes nappies, he goes to ‘mummy and me’ with me, he does really good daddy stuff.” Field loves her husband’s singing but their daughter, Teddy [Theodora Rose], doesn’t appreciate it as much. Field told Hello, “[Robbie] does Wheels On the Bus but it was funny though—Teddy said to him yesterday, she said ‘Papa if you sing again, I’m going to put you in time out.’” Adorable!

Williams, 42, recently began to go to the supermarket! His wife explained, “He is like a 15-year-old boy—he’s just frozen in ‘Take That’ time. He literally had no idea.”

He Live-Tweeted His Son’s Birth

On the birth of his second child, son Charlton Valentine, Williams struck controversy when he shared live video clips on Twitter. Williams’ son, Charlton Valentine, was born October 28, 2014, and the ex-Take That star live Tweeted his wife’s labour for hours. In the short clip, Robby expressed his affection, “Erm, so, he’s here. It’s ten past three on what day? Monday? And we’ve been up way over 24 hours. I’ve never been more in love and I’ve never been more proud of my wife, she’s been absolutely astonishing.”

Robbie Williams shared his new music video, “Party Like a Russian,” on September 30, which you can check out on his Facebook page. Williams’ new album, Heavy Entertainment Show will be released on November 4, 2016. Robbie Williams’ songs will make Take That fans very nostalgic—but based on his new video, Williams has a lot more in store! Robbie Williams’ net worth is a whopping $200 million, and if his new album is a success, that number is just going to keep climbing!