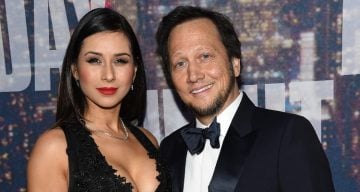 Funny man Rob Schneider has been making headlines for weird reasons recently. But we’d rather talk about his latest Netflix series, Real Rob starring his family! Rob Schneider’s wife, Patricia Azarcoya Schneider also has a big part in the show. We’ve got all you need to know about her, right here.

Rob Schneider is returning with season 2 of his Netflix comedy series, Real Rob starring his wife, Patricia Azarcoya Schneider, and his daughter, Miranda. Schneider didn’t get much love from Netflix subscribers, but everyone is in love with Azarcoya, who also has a knack for comedy! Here’s what you need to know about Rob Schneider’s better half in our Patricia Azarcoya wiki.

Patricia Azarcoya Arce doesn’t just play the Mexican-American wife of the fake Rob on Real Rob, she’s a native of Mexico, too! Not much is known about this gorgeous Latin beauty, including her age or early life. We do know that she’s much younger than 53-year-old Rob Schneider and is pretty successful in her own right.

Professionally a television producer, she has mostly worked in Mexican television. Having produced several Spanish TV shows, Real Rob was her first venture into American broadcast.

Schneider and Azarcoya shouldered most of the production budget of Real Rob and she is also credited as being a writer for the show, along with her husband. Besides making her own acting debut with the series, she was the show’s casting director. She’s made small appearances in short films like Fight or Flight.

The comedian was first married to the former model, London King during his days on SNL. They have a daughter, Elle King who’s now a 28-year-old musician famous in her own right. After Schneider and King divorced, Elle spent time between both parents. He later married Helena Schneider, but their marriage also ended in divorce.

In 2011, Schneider married his longtime girlfriend, Patricia Azarcoya Arce during a private ceremony in Beverly Hills. Details of their wedding were kept under wraps while Schneider released a statement. “Patricia and I were surrounded by our closest friends and family; it was the happiest day of my life,” said the actor. “We had a great time at the wedding and are looking forward to our honeymoon.”

Rob Schneider created the Netflix fictionalized autobiographical series Real Rob, which portrays an exaggerated version of his own family life. Though we live for more of Deuce Bigalow’s gimmicks, Schneider’s fans were largely disappointed by his show. Nevertheless, there was one redeeming grace in the form of Patricia Azarcoya. It turns out, Rob Schneider’s wife can be funnier than Rob Schneider himself!

Her popularity soared since Real Rob premiered. Her Instagram has almost 6,000 followers, and she’s very active on social media posting pretty selfies and adorable pics of her children. If you’re hungry, you might want to stay away from her Instagram and the posts of some very mouth-watering food!

She’s currently using her Twitter and Instagram to rally attention to relief efforts in Mexico in the wake of the disastrous earthquake that has caused so much devastation. Mexico was devastated by a 7.1 magnitude earthquake on Tuesday (September 19). The Schneider couple are using social media to do their part in the relief efforts.