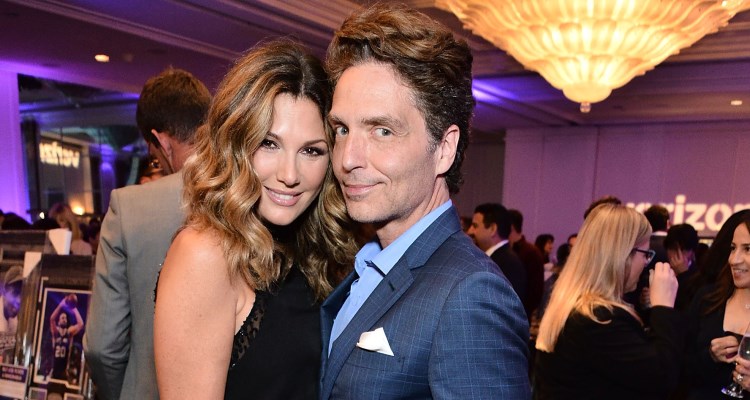 Who is Daisy Fuentes married to? A hero! “Right Here Waiting” singer, Richard Marx had to restrain a violent passenger during a Korean Airlines flight Tuesday. It’s been a while since Marx has been in the spotlight but the recent photos of the airplane incident, posted by his wife, have brought him back into the public eye.

Marx thanked fans via Twitter for their concern after the dramatic event. “Daisy and I are home safe and hound. No big ‘hero’ move at all. Just did what I would hope anyone would do in same situation. Thx 4 concern,” he wrote. An out of control passenger had to be tied down by ropes and handed over to police, after the plane landed at Incheon Airport in Seoul, South Korea. According to Marx’ wife, the passenger was abusing the flight staff and Marx was the first to do anything about it. The staff did not know how to use the Taser or secure the rope around him. “We have video of the entire chaotic and dangerous event on @KoreanAi_KE 480. Lasted 4 hours. Crew completely ill-equipped to handle situation,” Marx tweeted. Fuentes supported Marx’ heroic actions during and after the incident, and took photos and videos, which she will soon release. Richard Marx and Daisy Fuentes’ wedding pics show just how in love this couple is. To learn more about the two, keep on reading.

On our flight from Hanoi to Seoul a guy sitting in the next row from us got crazy & started attacking the flight attendants & passengers. When he started pushing the female staff and pulling them by the hair @therichardmarx was the first to help subdue him. This went on for FOUR hrs. I feel horrible for the abuse the staff had to endure but no one was prepared for this. They never fully got control of him. They didn't know how to use the taser & they didn't know how to secure the rope around him (he got loose from their rope restraints 3 times). I'll be posting some of the video after our next flight.

Richard Marx and Daisy Fuentes’ wedding pictures were captured in the romantic winter wonderland in Aspen, Colorado. They had a pre-Christmas ceremony on December 23, 2015 and the ‘80s singer/songwriter/producer shared beautiful photos on Instagram with his beautiful bride. Both shared heart-melting moments from their special day on social media. People have often wondered what the Richard Marx and Daisy Fuentes age difference is, since Fuentes looks much younger than her husband—as it turns out, Marx is 53, while Fuentes is 50. Not much of a difference there! The Cuban-American model and hostess is very happy with her ‘80s musician hubby, and it looks like the couple has been going strong in their first year of marriage. Check out the photos below!

We’re glad the violent passenger was restrained before any further damage could take place. If you’re waiting to see the Richard Marx and Daisy Fuentes video from the flight, keep checking in on Fuentes’ Instagram (@daisyfuentes), as the celebrity beauty will likely be sharing the video in the near future.

On December 23rd, 2015 the magnificent @daisyfuentes gave me the honor of becoming my wife. #Aspen