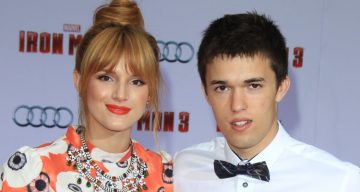 Bella Thorne’s brother, Remy Thorne, has remained silent since the news broke of what his sister has been up to. After a public one-year relationship, the Disney actress broke up with English actor, Gregg Sulkin, before coming out as a bisexual only a week after their breakup, via a response to a Tweet inquiring about the actress’ sexuality. The news shocked her followers and fans of The DUFF actress are now searching, “Bella Thorne dating brother’s ex.” Bella Thorne appears to be in some sort of relationship with Remy Thorne’s girlfriend, or, Remy Thorne’s ex-girlfriend to be exact. Bella Thorne’s new girlfriend is none other than Bella Pendergast – her brother’s ex. Awkward much?

Attached at the Hip

Remy Thorne was always close with his three sisters growing up. Bella, Dani and Kaili lived with him and their family in Florida. Remy shares the same dream as his sisters to build careers in modeling and acting. He performed in Stuck on You (2003) and Telemundo. As children, the four wold enjoy imaginary games and create comedy shows. Remy was always close to his sisters, so Bella’s actions could be viewed as betrayal.

Bella Thorne was always friends with Remy’s ex, Bella Pendergast, but it turns out the relationship may be more than “just friends.”

Bella Thorne recently broke up with Gregg Sulkin. The pair publicly explained their breakup saying, “Our schedules made seeing each other difficult, and we decided that for now this would be best.” Bella Thorne could have moved on earlier than we thought, considering her intimate friendship with Pendergast.

These are his favorite pants ❤️???? so I try and wear them allllll da time

Bella Thorne has always been friends with Pendergast – the two are in many photos together on social media. The pair even got matching tattoos! Bella Thorne and Pendergast even posted Snapchat photos of them kissing. Thorne expressed her affections on social media, but the same cannot be said for Pendergast.

According to the evidence from Pendergast’s Instagram, she is still in a relationship with Bram Kolber (@instabram_). On August 24, Bram posted a photo of himself with his #WomanCrushWednesday, Pendergast. Pendergast also posted a photo just a week ago of her coming home to a surprise by her boyfriend. The couple seems to still be together, so what is going on here? Where does Bella Thorne fit into this? It seems it’s far too early to know what’s really going on here.

What is clear however, is that Bella Thorne did not abide by “The Bro Code” (never date your friend’s ex, and we’re pretty sure that includes your siblings’ ex), and her actions have brought her into the spotlight. Perhaps only the two Bellas know what’s going on. As for the rest of us including Remy, we’re stumbling in the dark until further details are revealed! So, stay tuned!