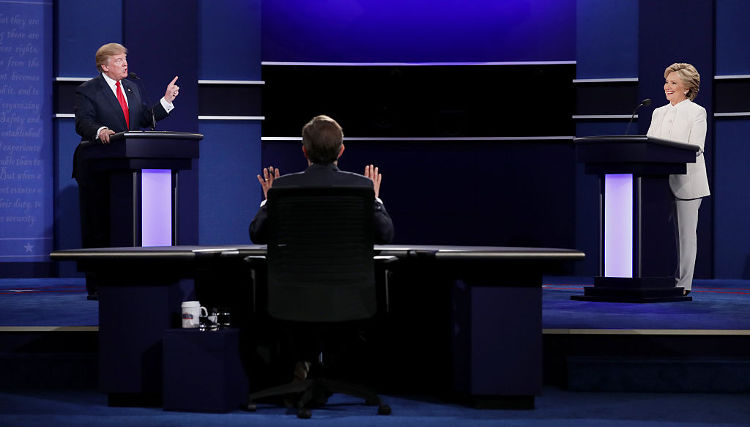 Fact Check: Donald Trump Claims that the media is “dishonest and corrupt.”

Last night was the last debate between Clinton and Trump before the U.S. presidential election in November. The third debate followed the same format as the first presidential debate. Divided into six different segments, this debate highlighted important topics chosen by moderator Chris Wallace of Fox News. If you want some fact checking done on this presidential debate, then keep on reading.

The topics for the last presidential debate were announced last week by Chris Wallace as being:

#1 Clinton claims that Trump has encouraged espionage against the United States.

Clinton: “It’s pretty clear, you won’t admit that the Russians have engaged in cyber-attacks against the United States of America, that you encouraged espionage against our people.”

Presidential Debate Fact Checker: It is indeed true that Trump won’t agree with Clinton that Russia engaged in cyber-attacks. In a July press conference held by Trump, he mentioned that Russian hackers would “probably be rewarded highly” by American media should they find Clinton’s 30,000 e-mails.

#2 Trump does not agree with Clinton’s statement that the women accusing him of unwanted sexual advances were not attractive enough to sexually assault.

Clinton: “[Trump] said that he could not possibly have done those things to those women because they were not attractive enough for them to be assaulted.” Trump interrupted Clinton by stating, “I did not say that.”

Fact Check: Though Trump never used the phrase“attractive enough,” he still implied that the women who came forward with these accusations did not meet his standards. If we take a look at People reporter, Natasha Stoyonoff, who made allegations against him of forcing himself on her, Trump told a Florida rally: “Look at her … I don’t think so.” Regarding, Jessica Leeds, another woman, who accused Trump of groping her, this time on an airplane in the early 1980’s, Trump said: “She would not be my first choice.” So, though he didn’t say it the same way Clinton did, the meaning of her words ring true.

#3 Trump claims that he has never met any of the women who have made allegations about him sexually assaulting them.

Trump: “Well, first of all, those stories have been largely debunked. Those people, I don’t know those people. I have a feeling how they came. I believe it was her [Clinton’s] campaign that did it. I didn’t know any of these women. I didn’t see these women. These women, the woman on the plane, the woman, I think they want either fame or her campaign did it. And I think it’s her campaign.”

Fact Check: The statement is false, because Trump admitted to knowing former Apprentice contestant Summer Zervos. There is also no indication that the Clinton campaign was behind any of the women coming forward about their allegations against the Republican nominee.