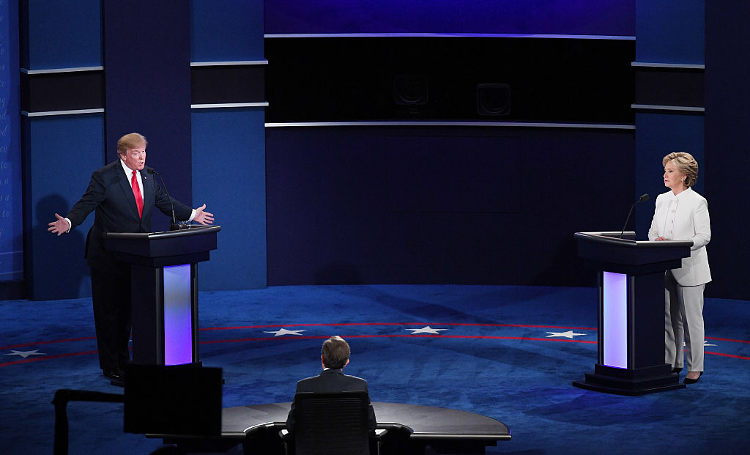 The final presidential debate took place today and the two candidates answered questions on important issues. The presidential race, in its final stages, is at it’s peak. Here are some key highlights from the final debate.

The final presidential debate took place at the University of Nevada in Las Vegas and was moderated by Fox News anchor, Chris Wallace. Democratic candidate and Secretary of State, Hillary Clinton took on GOP nominee and real estate businessman, Donald Trump for the final debate before the November 8 elections. Immigration, economy and foreign affairs were among the key issues discussed. In the race to The White House, both candidates have dug up old dirt and dealt with serious scandals.  The full presidential debate could be streamed live on YouTube. Here are some highlights from the third and final debate and details on who won the third presidential debate tonight.

Clinton and Trump opened with exchanging jabs about gun control measures and the National Rifle Association. The Supreme Court, abortion rights and marriage equality were also matters of discussion between the candidates.

The biggest issue of contention was immigration. While Hillary emphasized on border security as part of immigration policy, Trump pointed out the criminal activities that take place because of the immigrants. And Hillary also called out Trump for his hypocrisy for employing immigrant laborers.

Hillary managed to push Trump into a corner over Russia. She cited his friendship with the Russian president and accused Trump of working for him. Trump continued to praise Putin but still after pressure from Moderator Chris Wallace and Hillary, he said he would condemn Russia if it was behind the hacking of government systems.

When the debate steered to economy, Trump took to praising himself and his contribution to the economy. Whereas Clinton said that President Obama doesn’t get the credit he deserves for improving the economy.

Then came the issue of Trump’s sexual misdeeds and Hillary’s private email server. Trump accused the Clinton campaign of stoking the allegations and said that he’s not guilty of the sexual assault allegations. But Hillary repeated that the man has a history of demeaning women. When Trump brought up her emails, she turned it on him saying that he tends to divert the topic, when he should take responsibility of his actions.

Who is in the Lead?

Hillary Clinton has maintained a steady lead in the polls ever since the first debate, and after the second debate, she proved that she could sway undecided voters in her direction. There was a large gap between both candidates’ figures after the first debate. However, after the second debate, Donald Trump’s poll figures improved. It is still nowhere near enough for him to close the gap and his numbers haven’t been improving since then. It appears that his ‘locker room talk’ scandal has impacted his campaign more than Hillary’s email scandal has affected hers.

Trump’s poll figures have significantly improved in this debate, but so have Hillary’s. He was able to stress his points more this time, instead of just bringing them up and then digressing. However, his immaturity is still going against him. For instance, he should’ve known better than to say Hillary Clinton is on drugs! He also continued to interrupt her with interjections with “wrong,” more times than we could count!

Trump has a significant support base, but it has not grown since the last debate. His poll figures are the same as the percentage of his supporter, which is certainly not helping him close the gap between himself and Hillary in the polls.

Hillary has only seen slight improvement in the polls. However, she’s still got a significant lead over Trump and is only aiming to maintain her lead. She has no interest in winning by a large margin, just as long as she wins. Currently, her lead reflects that Trump’s character flaws are worse than her public service failures.

Even though Trump has picked up in the polls, Hillary is still in the lead. The third Presidential debate marks the final milestone in the U.S. Presidential Campaign for 2016 before Election Day. On November 8, voters will cast their ballot and vote for either Hillary Clinton or Donald Trump for President of the United States.

Watch the entire highlights of the debate below: