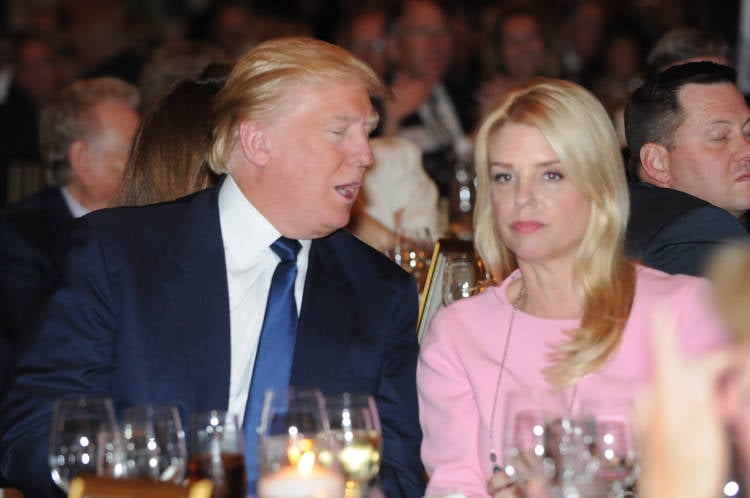 If you’re asking yourself, “Who is Pam Bondi?” Join the club. Pam Bondi is the current Attorney General of the state of Florida, USA. Her full name is Pamela Jo Bondi and she is a hard as nails lawyer, who fights a good fight. She is also a politician and a member of the Republican party. Why is she famous? It’s because she has brought several powerful people to court in her capacity as a crusader who represents the long arm of the law. The question that has everybody interested is, “Is Pam Bondi pregnant?” Though there has been no confirmation on this, the rumors are flying thick about her supposed pregnancy.

She has come into the spotlight after Donald Trump began his bid for the post of the President of the USA. Her earlier run-in against Trump is the reason the media is focusing on her. It all began when there were at least 22 complaints of fraud against Trump University that were received by the Florida Attorney General’s office. Trump University was a for-profit education company that was initiated in 2005 by Trump and his associates. It offered courses in real estate, entrepreneurship, wealth creation and asset management. However, it was not accredited and did not grant degrees, confer college credit or grade its students. The University had controversial marketing practices and became defunct in 2010. Bondi’s office was considering to join a lawsuit against Trump regarding this university. Mysteriously, four days later a Political action committee [PAC] that supported Bondi’s re-election was the recipient of $25,000 donation from the Donald J. Trump Foundation. That’s when Bondi refused to join in the lawsuit against the Trump University. The charge is that Pam Bondi received $25,000 from Trump. In her defense, Bondi’s spokesman has said that she received the donation before the decision to file a lawsuit. Hence there is no quid pro quo here.

Now there is this sudden interest in Bondi’s personal life. After initial rumors of Bondi’s pregnancy began floating around, more and more people are glued to their net devices to find material on her. So far, Bondi herself is keeping quiet. Bondi is no stranger to controversy. She is known to go after big ticket names in her quest for justice for the people of Florida. Some of the people who have felt her claws are Major League Baseball player Dwight Gooden and the Martin Anderson death defendants. She has also been criticized for the fund raising activities she has undertaken in her various elections. She is an ambitious person who has defeated powerful male rivals for the post of Florida Attorney General.

Her stand on same-sex marriages has also been controversial. Initially, she vehemently opposed same-sex marriage but after the Orlando night club shootings, she changed her stance. She now says that she supports the gay and LGBT community in their struggle for acceptance. The same is posted on her website, as well. Her private life has been the subject of much speculation. After two divorces she is now in a relationship with her multi-millionaire boyfriend, Greg Henderson, who is a doctor. However, there are rumors currently that even this relationship is over.

Bondi takes a special interest in crimes against women and children, especially sexual assaults. She has supported the distribution of sexual assault kits in her state of Florida. Bondi is admired by women for her achievements and for her character. Though she has run into foul weather because of her Trump connection, she is showing no signs of stopping the fight against crime in her state. Pam Bondi is one fierce woman!