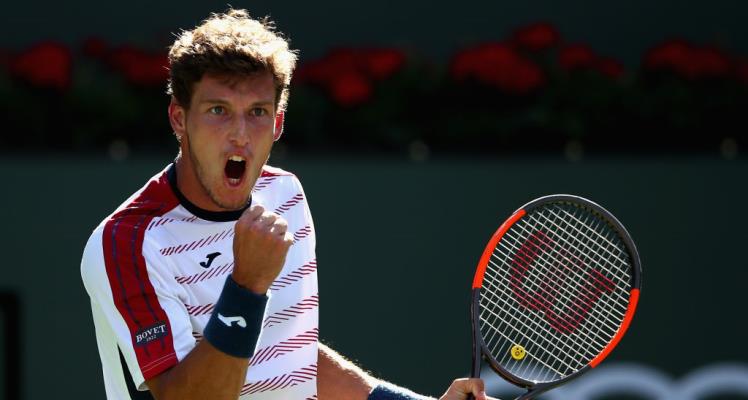 Who is Pablo Carreno Busta?

Born in Gijon, Carreno Busta currently resides in Barcelona and trains at the JC Ferrero Equelite Sport Academy in Alicante. Dedicating most of his time to training and working out, his hard work definitely shows through his performance. While Pablo Carreno Busta reached #96 in the world junior rankings in 2009, he didn’t go on to compete in a professional tournament in 2011. By 2016, he’d won his first ATP title, and entered the ATP Ranking for the very first time. This year, the 26-year-old tennis player participated in the French Open quarterfinal, Indian Wells, and U.S. Open semifinals, and Top 20 Debut.

Who is Pablo Carreno Busta’s Girlfriend?

There’s not much about Pablo Carreno Busta’s personal life online, which has left many who are lusting after him asking, “Who is Pablo Carreno Busta’s girlfriend?” While his career is definitely on an upward trajectory, the same can’t be said for his personal life. His Instagram page is full of work-related photos—which is no surprise considering how much time he spends training, and on the court. It seems as though the young tennis player has no time for romance in his life at the moment, and is without a leading lady. At age 26, and with his boyish good looks, we’re sure Carreno Busta has a trail of admiring women following wherever he goes—when he decides to settle down with someone and get into a serious relationship, is up to him.

Back in June, Carreno Busta suffered a bit of a set back, which left fans wondering if he’d be able to compete at Wimbledon. He captioned an Instagram post of him getting an ultrasound (shirtless, may we add) in good spirits: “In the results of the tests it has come out that I have a small abdominal rupture. During the next few weeks depending on how the recovery goes I will know if I can go to Wimbledon or not. Many thanks to all for the messages of encouragement that I have received these days!” Unfortunately, the player was forced to withdraw from Wimbledon due to his injuries.

A month later, Carreno Busta uploaded another post on Instagram letting his fans know what he was still out of commission: “After resenting the injury suffered at Roland Garros a month and a half ago, I have had to withdraw from @swedishopen. Difficult moments that will surely pass soon. #patience.”

While the young player was unable to attend both Wimbledon and the Swedish Open, he’s returned with a vengeance and is making headlines at the 2017 U.S. Open. He defeated Diego Schwartzman, beating him 6–4, 6–4, and 6–2 in all of their matches. Carreno Busta is clearly ecstatic to be back on the court, as he tole Euro Sport, “It’s very exciting to be in the semi-finals. It was a very good match today. I tried to be focused all the time, Diego is a fighter. You need to be aggressive all the time and try to dominate the points.”

We’ll be following Pablo through the tennis season—and even after, keeping an eye out for any special ladies on his radar!