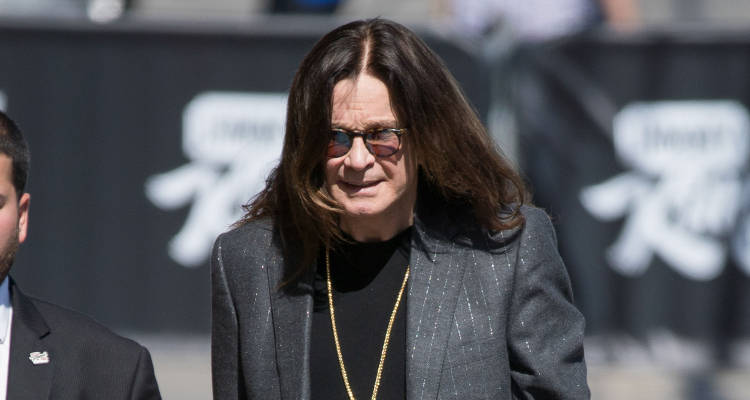 Fans of Ozzy Osbourne have a big reason to celebrate. The paparazzi caught Ozzy Osbourne shooting for Jimmy Kimmel Live at Los Angeles, California. The Black Sabbath frontman was seen entering the studio where an upcoming episode of Jimmy Kimmel Live is to be shot. Osbourne sightings are a rarity these days, so the news that he will soon be appearing on Jimmy Kimmel Live is making his fans very excited. Osbourne, whose last album (with Black Sabbath) was released in 2013, was seen wearing his trademark black trousers and black shirt. He was wearing a gray overcoat with several chains hanging from his neck. Though his fans called out to him, Osbourne did not wave back or respond to them.

Osbourne first found fame as the lead vocalist of Black Sabbath in the early ’70s. He belted out all time classics like, “Ironman” and “Paranoid” and was one of the pioneers of a musical style that came to be known as ‘Heavy metal.’ Despite being a binge drinker and taking many drugs, Osbourne released several albums with Black Sabbath that sold millions of copies. When his behavior became erratic, he was fired by the band and had to leave the group. However Osbourne was not one to sit quiet. He put together a new band and embarked on a solo career, which was also very successful. He has released 11 solo albums with several of them going multi-platinum.

That’s not all! How could we forget that Osbourne has had his own reality TV show called The Osbournes. This MTV Reality show featured his wife, Sharon Osbourne, and two of his children, Kelly and Jack. Osbourne has also written an autobiography titled I Am Ozzy, which was released in 2009. Osbourne is loved by his fans for his music more than anything else. His solo career is dotted with hits like “Dreamer,” “Close My Eyes Forever,” “Mama, I’m Coming Home,” and “Ghost Behind My Eyes.” Even though Osbourne has done some crazy things (biting the head off of a bat and of a dove certainly stand out), he is still loved by his fans and his albums continue to sell like hot cakes! To date,  Osbourne has sold more than 100 million copies of his Black Sabbath and solo albums.

Throughout 30 years of making genre defining music, Osbourne has been supported by his wife, Sharon. She was the daughter of their manager and ever since Osbourne has been married to her, Sharon has taken care of his career. Some months ago, Sharon left him saying it had become impossible to live with him. Fans were shocked at this development because ever since their marriage, both Osbourne and Sharon have been inseparable. The good news for all their fans is that they are back with each other again. Sharon Osbourne confirmed to the media that they are, in fact, a couple again. Osbourne himself is thrilled at being back with Sharon. Sometimes you just don’t know what you’ve got until it’s gone!

For the Love of Heavy Metal

Osbourne has had a fascinating lifelong career, venturing into the dark side of life. It’s no wonder he is nicknamed the ‘Prince of Darkness’. Osbourne has also been called the ‘Godfather of Heavy Metal.’ Despite all these titles, Osbourne remains one of the most dedicated artists of all time. He is an inspiration for every person who aspires for a career in heavy metal or rock music. Despite his eccentricities and erratic behavior, when it comes to pure music, no one can outperform Osbourne. So light up your candles, draw your coat around you and dive into the mad, dark world of Ozzy Osbourne.