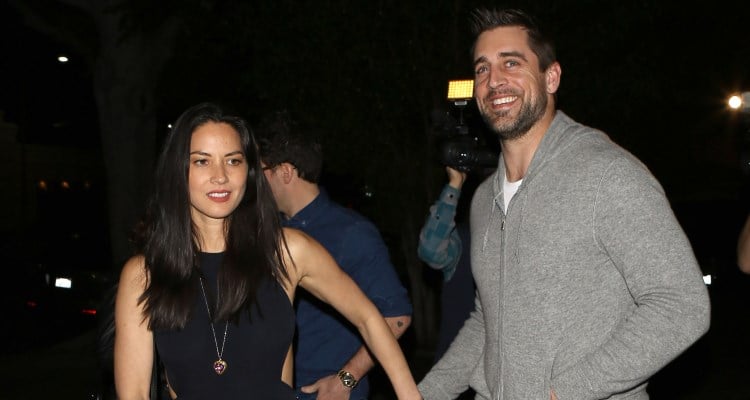 In May 2004, actress Olivia Munn began dating Aaron Rodgers, a quarterback for the NFL’s Green Bay Packers, following her split from actor Joel Kinnaman. They apparently met a month prior at the 49th Annual Academy of Country Music Awards, having hung out together backstage. While there’s no word if she will be the search result for “Aaron Rodgers wife” anytime soon, they certainly seem to be happy together. But can they survive the Aaron Rodgers family feud?

Outside of being the result of a search for “Aaron Rodgers brother,” Jordan Rodgers is a former quarterback himself, though he hasn’t played professionally since he suddenly quit in 2015. Right now, he is best known as one of the remaining contestants on the current season of The Bachelorette, vying for the affection of Joelle “JoJo” Fletcher. This week’s episode was a big one for the younger brother’s chances, as it was the one where Jordan, as well as the three other remaining men, would introduce Fletcher to their families. There’s just one problem, though; when she met the Rodgers family, Aaron wasn’t there.

The episode made a big deal about his absence, though Jordan Rogers was not very forthcoming with details. As a result, Fletcher spent part of the episode investigating. She and Jordan visited his high school and she even asked for more info from the other brother, Luke, who didn’t provide much outside of hoping, “God brings things full circle.” Jordan’s father, Ed Rodgers, also chimed in stating that he thinks fame was a factor in the Aaron Rodgers family fallout.

So, why is Olivia Munn reportedly the one to blame the Aaron Rodgers brother drama? Well, truth be told, it’s not very clear; Jordan Rodgers never seems to give an explanation outside of, “it’s complicated,” which may as well be his catchphrase at this point. However, the general consensus is that the two younger Rodgers brothers had a fine relationship until Aaron entered a relationship with Munn, implying that the issue is perhaps that the larger contingent of the Rodgers family isn’t particularly fond of her.

Another possible factor is Jordan’s ex-girlfriend Brittany Farrar, who is friends with both Olivia Munn and Aaron Rodgers, serving as Munn’s trainer. When this season of The Bachelorette premiered, Farrar took to social media with an Instagram post saying he was a cheater—a post which Olivia Munn liked. She also made other accusations about Jordan, namely that his appearance on The Bachelorette was a publicity stunt to get him fame and attention on the level of his NFL star bother. She has also met Jojo Fletcher, telling her that Jordan Rodgers wasn’t a very good boyfriend. Before the current round of drama stemming from this week’s episode, the friendship between Farrar and Munn was believed to be the catalyst for the Aaron Rodgers family feud, as opposed to it being specifically Munn.

Regardless of the reason, the behavior of Aaron Rodgers’ brother, Jordan Rodgers, on The Bachelorette likely isn’t helping things, as he seems prone to mentioning his brother way too often for someone he’s apparently mad at. And, of course, the most recent episode likely only fanned the flames, given that Aaron Rodgers had his entire family talking poorly about him on national TV, without him being there to defend himself.