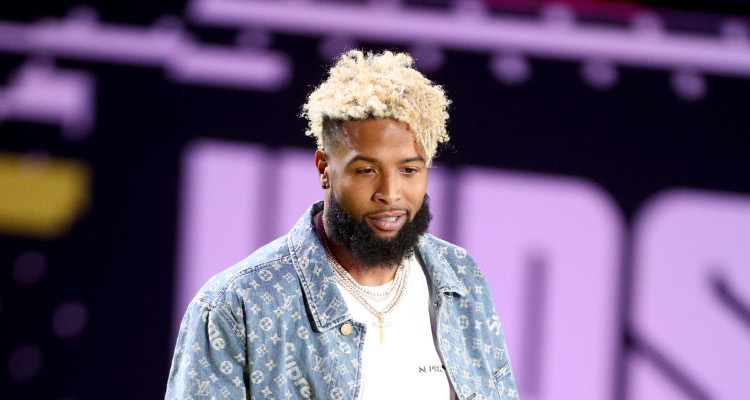 New York Giant, Odell Beckham Jr. sure is popular with the kids! He won the Nickelodeon Kids Choice Award for Hands of Gold for the third consecutive year in a row! But why is Odell Beckham Jr.’s girlfriend making headlines? We’ve got the scoop!

Odell Beckham Jr. has fans of all ages, but it was the kids who played a role in him winning the Hands of Gold Award at the Nickelodeon Kids Choice Awards 2017 for the third time. And it looks like he’s celebrating the honor in Cancun with a pretty companion! The NFL pro had been linked to Khloe Kardashian and Amber Rose in the past, but now in 2017, he is rumored to be dating a woman named Polyxeni Ferfeli. Everyone is dying to know more about her since spotting her with Beckham Jr. in Cancun a day ago. Find out more about Beckham Jr.’s new girlfriend in our Polyxeni Ferfeli wiki.

Who is Polyxeni Ferfeli?

The Giants’ wide receiver has gone through the first half of 2017 with a lot of speculation about his dating life. Last year, he was linked to Khloe Kardashian, which he said had affected his personal life. In 2017, he’s had rumored romances with Amber Rose and Iggy Azalea. This year, he’s been spotted out on a few dates with a woman who goes by the name Poly Ferfeli. After some digging, we come to know her full name is Polyxeni Ferfeli.

Odell Beckham Jr. and Poly Ferfeli haven’t exactly confirmed their relationship status. However, their interactions on Instagram and their trip to Cancun have left many speculating. And how could we not? Those two were heating up the whole beach in Cancun!

Not much is known about her personal life. She is reportedly of Greek ethnicity and according to her LinkedIn, she is fluent in Greek, Spanish, and Romanian, along with English. Her mother is said to be living and working in Romania.

Ferfeli graduated from the prestigious Regent Business School of London with a Bachelors degree in global business management and finance. She put her education to use while working for the Elgeka Group as a marketing assistant in 2010, and a human resources generalist for Elgeka-Ferfelis SA in 2011.

Beckham Jr.’s new flame has apparently put her management days behind her and switched to modeling. From the looks of it, she’s now an Instagram model. Ferfeli seems to be following the Kardashian beauty book with the way she flaunts her curves in figure-hugging ensembles. (Not that anyone’s complaining!)

Ferfeli is very popular on social media. Her Instagram has over 18K followers and counting, and is where she shares her jet-setting party life. She frequents Hollywood hotspot, The Nice Guy among a few other places. It helps that she’s friends with the in-crowd, including Dolph Lundgren’s daughter, Ida Lundgren.