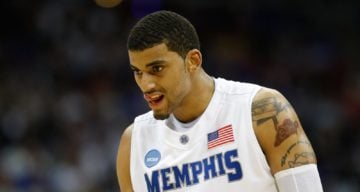 Shawn Taggart of the Memphis Tigers in the NCAA Division I Men's Basketball Tournament. (Photo by Jamie Squire/Getty Images)

Basketball Wives season 9 is getting interesting, with the VH1 show adding sisters Noria and Nia Dorsey to their cast. Noria Dorsey is a new friend of the Wives married to Shawn Taggart, a professional basketball player in the Philippine Basketball Association. As with any new reality television debutante, the show’s fans are eager to know who Noria Dorsey is. So, we have all the details on the basketball wife in Noria Dorsey’s wiki.

Noria Dorsey was born on October 7, 1988 and hails from Memphis, Tennessee. She and her younger sister, Nia Dorsey, are the daughters of Norman and Pamela Dorsey.

Norman Dorsey passed away in June 2020. He is survived by his wife and two daughters, among extended family.

Richmond, Virginia native Shawn Taggart played basketball for the Memphis Tigers of the University of Memphis in Tennessee. It’s unknown when and how he began dating Memphis native Noria Dorsey.

After getting engaged in 2014, Noria Dorsey and Shawn Taggart married on January 7, 2015. She goes by Noria Dorsey-Taggart on social media.

Dorsey and Taggart are parents to two children, Shawn Jr. and Naomi. The two children regularly feature on their parents’ Instagram accounts.

Shawn Jr. was born on January 5, 2011, so his birthday and his parents’ wedding anniversary is probably a double celebration in the Taggart household. His sister, Naomi, was born on May 12, 2018.

Noria Dorsey is a graduate of Ridgeway High School in Memphis. She later studied cosmetology at Paul Mitchell The School Memphis, graduating in 2013.

Noria and Nia Dorsey joined the lineup of Basketball Wives for season 9, which premiered on February 9. They are both friends of the Wives, but their growing legions of fans hope to see them promoted to the main cast.

Besides her new reality tv career, Noria also has a line of haircare products, Hair Addicts Collection. The brand launched in 2020.