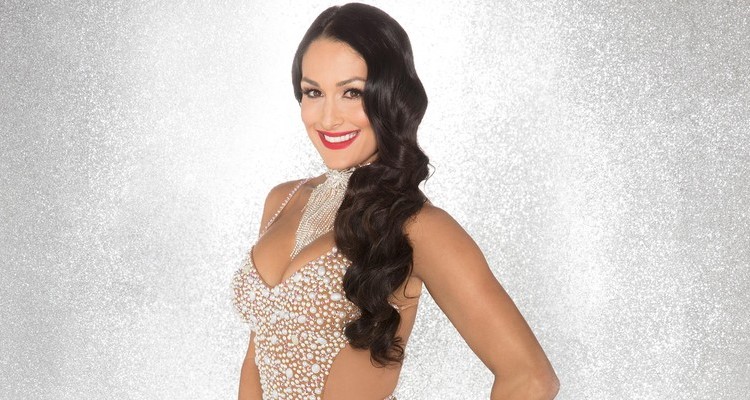 Nikki Bella and Artem Chigvintsev on Dancing with the Stars made their debut with a fabulous performance—and an even better ending! We were ecstatic when we found out these two were paired up for this season’s Dancing with the Stars cast, and it’s clear they’re here to impress. Straight out of the gate, Nikki Bella and Artem Chigvintsev on DWTS are serving up incredible moves, and proving themselves to be serious competitors to watch out for!

A true WWE vixen, Nikki Bella’s Dancing with the Stars debut couldn’t have gone without a little wrestling inspiration, which is exactly what she brought to the table with her performance. Bella and Chigvintsev performed the tango, with a surprise body slam at the end! We know that Nikki Bella is a die-hard wrestler, but didn’t know that she’d pull out such a bold move—especially for her first performance! Nevertheless, we loved it more than any other performance of the night for its uniqueness.

“I cannot describe how happy I am to have Nikki as my partner. I’ve never felt such a rush,” said Artem Chigvintsev on DWTS, in a clip played before their performance. He was excited to be paired up with Bella before they started rehearsals, but did he like her just as much after that body slam? “The body slam actually didn’t [hurt during practice], I mean, it hurt, but it didn’t hurt like this, and the end of the routine, that hurt because this floor is wooden… it doesn’t bounce,” Chigvintsev told ET. Bella also confessed that she may have had a rush of adrenaline, which caused her to lift Artem Chigvintsev on Dancing with the Stars a little higher than they’d practiced in rehearsal! She also pinned her partner down while he was still on the ground because “it just felt right.” Seems like you can take the girl out of WWE, but you can’t take the WWE out of the girl!

Starting tomorrow #bellaarmy #wweuniverse and my E! Family vote for @theartemc & I! I hope to make you all so proud! Thank you all SO much for your support ? #teamsmackdown

Their Power-Packed Performance Stunned the Judges!

It was no surprise that when it came to the judges feedback on Nikki Bella’s DWTS debut performance with Chigvintsev, that it was one of the highest ranked of the night! While Len Goodman told Bella that she had a habit of looking down while she performed and that she should “Life [her] chin up and sizzle,” the couple scored a cool 20 points out of a possible 30. They received 7 out of 10 from Goodman and Carrie and Inaba, and 6 out of ten from Bruno Tonioli. This left them just two points shy of first place, behind Jordan Fisher with 22 points, Lindsey Stirling with 22 points, and Vanessa Lachey with 21 points.

Last night was magical! I can't believe I did a whole dancing routine on live TV! I couldn't have done it without the WWE Universe, Bella Army, John and my family's support! I literally cried seeing all the amazing support from my female wrestlers! Girls, last night was for you! Especially the finishing move! Had to show the world you never mess with a female WWE Superstar ???????❤️☺️And most importantly thank you @theartemc for being the best coach and dancing partner anyone could ever ask for!! ??#dwts #teamsmackdown #fearlessnikki #wwesuperstars #totalbellas #totaldivas

Don’t Rule Out this WWE Queen!

Nikki Bella is here to impress, and plans on pulling out all the stops! With the intensity she’s bringing from the ring to the dancefloor, she’s definitely a force to be reckoned with. “I think the minute I hit the dance floor, Dancing With the Stars is going to have no idea what hit ’em,” Nikki told E! News. “I mean, you already know how I can move my hips, so I think you know I’m going to surprise some people!”

Who do you think will be this season’s DWTS champ? Leave us a comment and let us know!