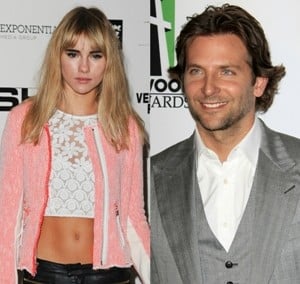 Bradley Cooper and Suki Waterhouse may be ready to take their May-December relationship to a whole new level—the celebrity couple is reportedly planning to start trying for kids. Although they have only been dating for a few months and there is a 17-year age difference between them, insiders claim they’re both so happy with each other that they feel they’re ready to start a family. “Bradley and Suki have been talking about having kids next year. They’ve been inseparable and Suki told friends having kids is something she’s thinking about,” said one source, who added that Cooper is just as excited about the idea of becoming a dad someday soon.

Cooper, who does seem to be very happy in his current May-December relationship, has admitted in the past that he’s thought about kids, and knows that it’s something he does want to experience when the time is right. “You go through stages in your life, and fatherhood seems like a natural stage.”

Kids are always a hot topic for age-gap couples, as well as for celebrity couples. Cooper is closing in on 40, which, for most men, is about the time that kids enter the picture. But Cooper’s Hollywood career keeps him pretty busy—he’s got a string of films lined up for release over the next year, and he also just signed on to produce a new television series. Meanwhile, Waterhouse is only 21 and she’s just barely brushed the surface of her successful modeling career.

What do you think: Is it too soon in their May-December relationship for this celebrity couple to start thinking about kids?