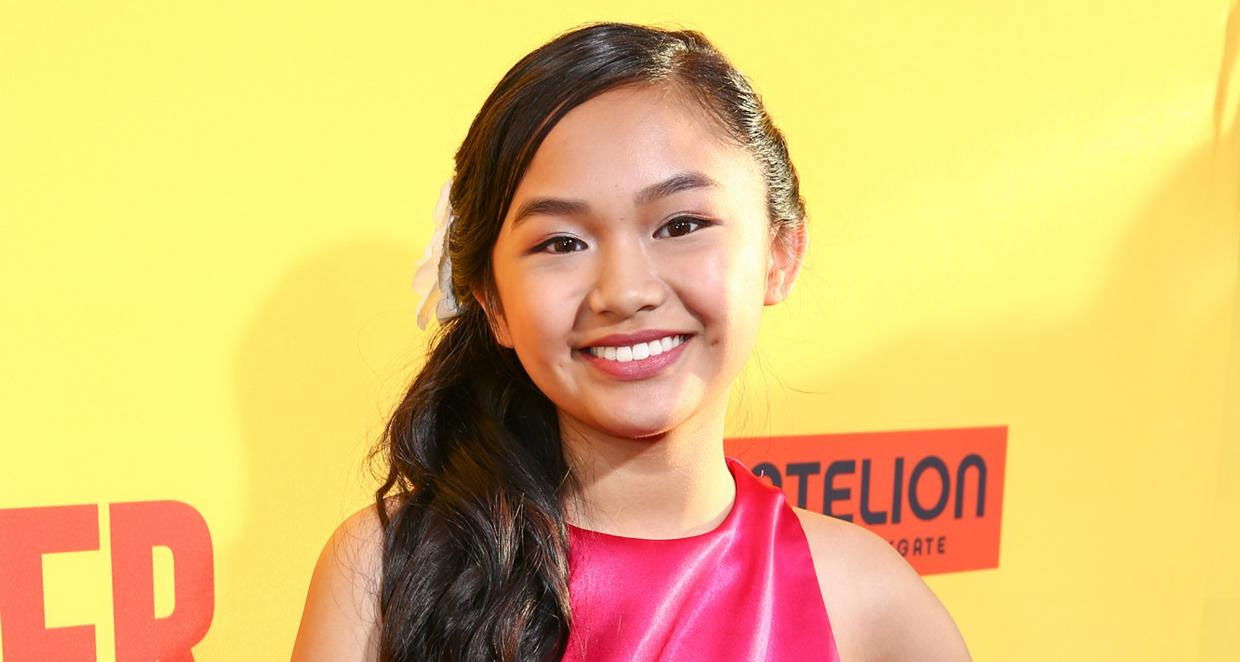 Nayah Damasen at the premiere of her debut film, "How to be a Latin Lover" (Photo: Rich Fury/Getty Images for Pantelion Films)

The Golden State Warriors may have Stephen Curry and Klay Thompson. But they didn’t take any chances for Game 1 of the NBA Finals and called upon the team’s lucky charm—13-year-old Nayah Damasen. Her voice isn’t just golden, it’s gold and blue. And when she sings the “Star-Spangled Banner,” the team can’t seem to lose!

Nayah Damasen, an ardent Warriors fan, was invited to sing the national anthem at the Golden State Warriors first NBA Finals game last night. She may only be 13, but she’s got larger than life talent. And her rendition of the “Star-Spangled Banner” has become a game-winning tradition for the Warriors.

The Warriors won Game 1 against the Cavaliers with a score of 124-114, proving anything is possible with their little lucky charm!

The Next Great Vocal Powerhouse

The world was first blessed with the vocal stylings of Nayah Damasen when she was just eight years old, as she belted out the national anthem at a Warriors’ game. She nailed the “Star-Spangled Banner” again back when she was a prodigious 10-year-old, and absolutely killed it three years later!

This 13-year-old multi-talented girl is a proud Pacific Islander from the Philippines. Originally from the Bay Area, Damasen and her family now reside in Burbank, California.

Music runs in the Damasen family’s genetics. Nayah’s older brother, Noah, and younger sister, Nikaela, are talented singers in their own right, as well.

According to their mother, Mardi Damasen, Nayah inherited her grandmother’s voice. Her grandma often performed at community events in the Philippines.

Mardi noticed her daughter’s talent when two-year-old Nayah began singing Disney tunes at home. Nayah’s father, Ervin Damasen, is an IT consultant who has gone above and beyond to help his daughter’s performing career.

By the age of four, Nayah was already accustomed to the stage. At that time, she was performing in musicals through Starting Arts Productions. She was already playing the leading roles in Flat Stanley, The Little Mermaid, and The Wiz at a very young age.

Her parents continue to drive her to her auditions and performance venues, and they helped her get voice lessons from a vocal coach, Eric Arceneaux, through Skype. Nayah is homeschooled through the Connections Academy Online Charter School. She has also taken acting lessons from Actorsite and Didi’s Reel Actors.

Call Her a Triple Threat

With the support of her family, Nayah Damasen has a thriving performing career. Besides singing, she’s also an actress and dancer.

In fact, the teen is already a member of the SAG/AFTRA! Her acting credits boast that of a character on one of the most popular shows right now, and you may have seen her!

She’s currently seen on Grey’s Anatomy season 14 as Kimmie Park, a young girl with an inoperable tumor. (She’s also given fans a taste of her voice on Grey’s, in case you missed it!)

Can you tell that I’m in love with roses????

She also appeared on Modern Family, Henry Danger, and To Tell the Truth. She recently made her feature film debut in How to be a Latin Lover alongside Kristen Bell and Salma Hayek.

Nayah expanded her resume with commercials and theater credits. And she’s also working on her debut EP!

While she’s currently working on a multi-faceted career, singing holds Nayah’s heart. Her vocal talents have won her multiple awards like the OMNI Youth Music 2014-Rising Vocalist, Double Grand Championship in 2012 for Alameda County, and the Narada Michael Walden Foundation Artist of the Year Award 2016.

Nayah auditioned for the San Francisco 49ers when she was six and residing in the Bay Area. She has sung at other games, several other sports events, and even fundraisers.

Nayah’s first Warriors game performance was her biggest back then. She was recommended to the team by a person who saw Nayah perform at a show. She was also a guest soloist for the Filipino Symphony Orchestra (FASO).

If you need more confirmation about Nayah’s magical quality, she has been officially dubbed the Golden State Warriors’ lucky charm! She has sung the national anthem at the team’s games dozens of times, and they have won every one of those games!

Barring once in 2013, against the San Antonio Spurs. But hey, lucky charms can be low on power once in a while, too!

Nayah proved lucky for the Warriors’ Game 1 victory, too. If she continues this streak, Nayah Damasen might be an honorary Warrior soon!