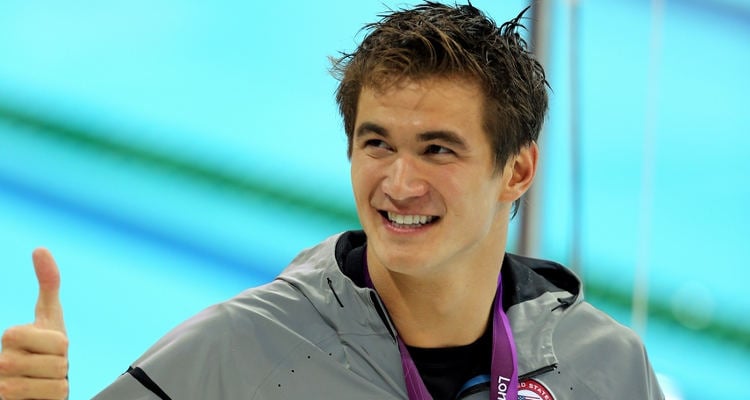 Another amazing swimmer gave a superb performance in Rio at the 2016 Olympics. Yes, we are talking about the 6 ft. 6 in. handsome swimming sensation, Nathan Adrian, who gave an amazing performance to win his fifth Olympic medal. If you want to know more details from Nathan Adrian’s wiki, such as Nathan Adrian’s girlfriend, and Nathan Adrian’s parents, then you need to keep reading.

This is not the first time he is competing in the Olympics. He won a gold medal at the 2008 Beijing Olympic games and he also earned both gold and silver in the 2012 London Olympic games. But there is more to him than just the aforementioned details, so read on to find out more about Nathan Adrian’s height, Nathan Adrian’s age, and Nathan Adrian’s ethnicity.

he was born as Nathan Ghar-jun Adrian on December 7, 1988 in Bremerton, Washington. His parents are James Adrian and Cecilia Adrian. His mother, Cecilia (a retired nurse at the Bremerton school district) is of Chinese descent and is originally from Hong Kong. James Adrian is a retired nuclear engineer who used to work the Puget Sound Naval Shipyard. Nathan has two older siblings, his sister, Donella, is also a swimmer and she swam at the Arizona State University. His older brother, Justin also swam at the University of Washington. It sounds like swimming is ‘all-in-the-family’ here!

Nathan started swimming at the age of five due to his siblings’ influence. He completed his graduation in the year 2006 from Bremerton High school. During his school days, he used to swim for his high school team. Later on, he was accepted to the University of California, Berkeley, and he majored in Public health. In the year 2012, he completed his graduation with his degree in Public health, and he did not fail to show off his swimming capabilities during his university days while he was there, either!

Before he participated in Rio Olympics 2016, it was speculated that he was dating Hallie Ivester. Not much is known about her because her social media accounts are private, but according to sources, the two started dating in 2013 and recently broke up. She was a swimmer at Stanford University. Recently in one of his interviews, he was asked about his relationship status, and he said, “I got to word this correctly… I just came out of a relationship, so…dating as an Olympic athlete is extremely hard. The levels of empathy have to be high in a partner if you are able to have a relationship.”

Nathan’s family is completely supportive of his choices and his career. In one of his interviews he said, “My family has been incredible. At the end of the day, I know my family loves me and supports me in whatever I do.” His mother further added, “When Adrian was in 7th grade, he wanted to leave our local swim team and join the Tacoma Swim Team which is 40 miles away. We made that trip to Tacoma for 6 years, snow or shine and never looked back.”

She just has one advise to give to other parents, which is, “Share the ups and downs with your child on the emotional level.” Further adding “Swimming is only a phase in their life, it will come to an end eventually– use this as a learning tool in life.”

He is indeed very close to his family and super close to his nephews, as well. His entire family cheered him on during the 2012 London Olympic games, and this 27-year-old American swimmer has already won even more hearts due to his amazing performance and stellar looks!

Here are some interesting facts about Sam Mikulak’s family!