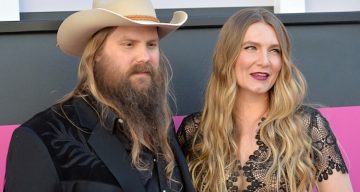 Country singer Chris Stapleton has been keeping busy with the release of his new album, and now all eyes are on him. But the 39-year-old singer-songwriter can’t take all of the credit for his success; he’s part of a dynamic duo! Chris Stapleton’s wife has been instrumental (see what we did there?) in her husband’s career, and it’s time to get to know her better. If you want all the details about Morgane Stapleton and Chris Stapleton, then don’t go anywhere.

How Did Morgane Stapleton Meet Her Husband?

Some fans probably didn’t know Chris Stapleton’s wife’s name, but she has been by his side since the beginning. There’s no word on Morgane Stapleton’s age, but fans get to at least know how the couple met. Chris and Morgane met through music (of course) and have been married for a decade now.

She’s the mother of Chris Stapleton’s kids: a son and a daughter. In an interview with the Washington Post, Morgane said she had a crush on Chris, mainly for his musical talents.

“We’d hear the jingle of his keys as he walked down the hall, and we knew he was coming to play us whatever new song he had written. Eventually he asked me to write a song with him, and that ended up being our first date. We didn’t get much writing done that night,” she explained.

First year we made it to the red carpet on time

She’s a Songwriter, Too

Morgane is a talented songwriter in her own right and has also built a name for herself in the music industry. She wrote “Don’t Forget to Remember Me” by Carrie Underwood, which she also provided vocals for. She also wrote “You Ain’t Right” for LeAnn Rimes.

She Inspired an Album

Her husband’s album, Traveller, is about the death of Chris’ father, who was a country music lover and coal miner. His father was a major influence in his life and Morgane knew that Chris needed something to help him cope with his grief. In an interview with The Tennessean, Morgane talked about her idea to buy a 1997 Jeep Cherokee and take a cross-country road trip to get Chris inspired.

The trip got off to a rocky start, but in the end, an album was born.

“We looked at each other like, ‘Yeah, we’re finally doing this,’ and then gas started spewing everywhere. We called the seller and he said, ‘Oh, you can’t fill (the tank) all the way.'”

Chris Consults Morgane about His Songs

In a joint interview with NPR, Morgane Stapleton talked about her position in consulting Chris when it comes to music.

“I don’t know about every step, but — yeah, he definitely, I think, leans on me for songs. And then there’s some, too, that he’s just determined to do. Traveller, actually, was one of those, where — not that it wasn’t on my list, but I had songs ahead of it. And I was wrong about that one, so — maybe not every step of the way, but definitely a lot of the steps.”

Chris just released his new album, From a Room: Volume 1 and so far, it has received positive reviews, cementing Chris Stapleton’s status as a country star.

If you want pics of the couple or details and previews of what’s next for them, then head over to their Instagram accounts. Both Morgane’s Insagram and Chris’ Instagram show posts of their music, interviews, and more. So, if you feel like telling them how much you love their music, don’t be shy!