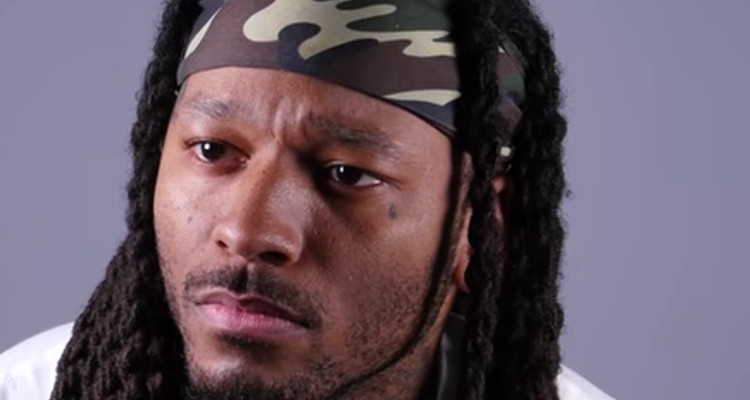 A few months ago, Montana of 300 announced the titles of his next three albums, along with their release dates. His latest album, Don’t Doubt the God is in the making and will be released on May 20, 2017. Although no details about Montana of 300’s new songs in 2017 have been hinted at, we are expecting it to be epic. 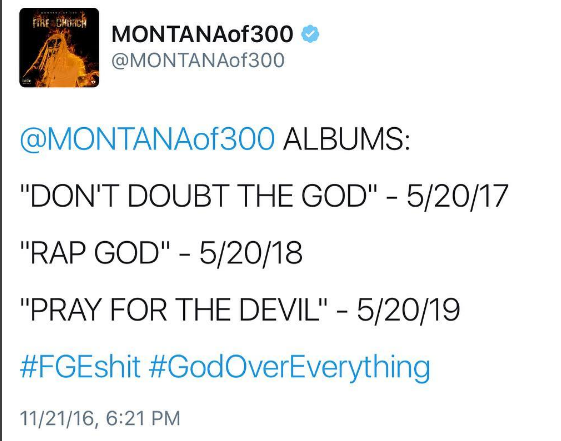 On his Instagram page, Montana of 300 wrote, “DON’T DOUBT THE GOD Album drops May 20TH!!! Im sorry for the date change and the delay but you can’t rush greatness. I want to try to challenge myself and outdo my FIRE IN THE CHURCH album.” Fire in the Church features artists such as Kevin Gates, Talley of 300, Jaylyn Sanders, and Shabba Wolf.

Don’t Doubt the God will be Montana of 300’s third album and it looks like he is working hard on his latest project. In fact, he seems to be working hard on his next three projects, as he has announced the release date for his third, fourth, and fifth albums. His fourth album will be called Rap God and has a May 20, 2018 release date. Pray For the Devil will be released on May 20, 2019. 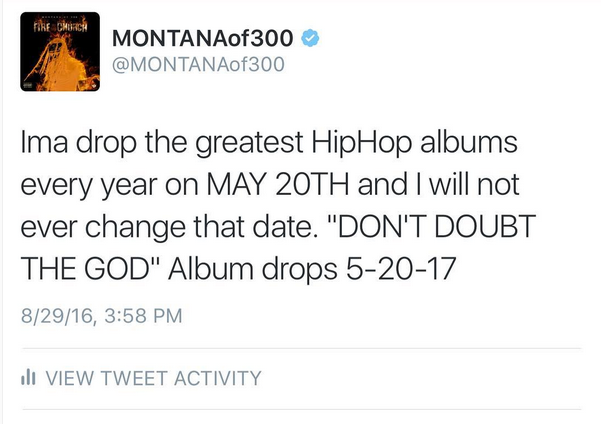 Montana of 300 is a hip hop artist from Chicago, Illinois. His style is considered very versatile as his raps include a lot of metaphors and complex lyrics. Montana of 300 first entered the music scene when he was 15, and he grew up admiring artists such as The Notorious B.I.G., Tupac, and DMX. Montana’s parents suffered from substance abuse. His mother was addicted to crack cocaine and his father was addicted to alcohol.

In 2008, Montana started the rap group, 300, with Talley 300. Their name was inspired by the movie 300. To kick-start his career and to get his name out there, Montana started remixing popular songs —some of which were arguably better than the original songs!

Montana of 300 will be on tour this month, and we have all the details below:

If you get the chance, buy tickets to see Montana of 300 live. For fans who will not get to see the rapper perform, there are only four months to wait until Montana of 300’s new album will be released!