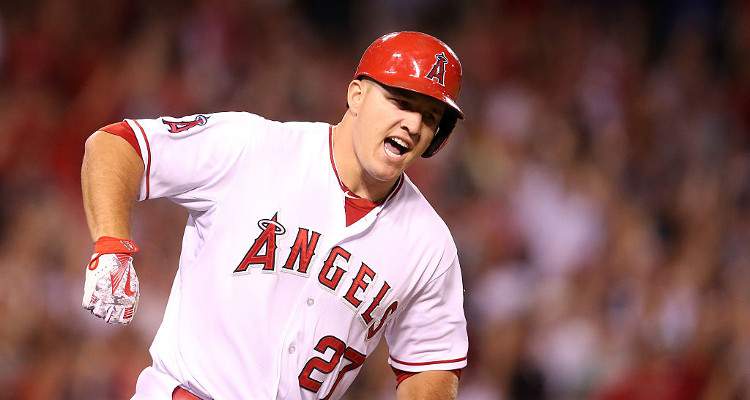 Famous MLB baseball star Mike Trout’s love for the weather is well-documented. It seems no one’s more interested the Northeast’s current freezing temperatures and snow storms than the Angels outfielder himself, and Mike Trout’s wife is certainly sick of hearing about it! He is married to Jessica Tara Cox, and she definitely knows a thing or two about his weather obsession! Keep reading to find out more about her in our Jessica Tara Cox wiki!

To say Mike Trout is obsessed with the weather is a bit of an understatement—just ask his wife! Apparently, he won’t stop sending the weather-related photos to her and she teased that she’d had enough. She responded to the MLB Network Radio’s tweet as they commended Trout on his vast knowledge of weather patterns saying, “He’s about one weather map photo short of me muting his text message alerts #theobessionisreal.”

Baseball fans have been loving the friendly Twitter banter between the newly-married couple, who tied the knot in a beautiful winter wedding last month. And we’ve got everything you need to know about Mike Trout’s gorgeous bride, so keep reading!

Born on October 5, 1989, in Millville, New Jersey, Jessica Tara Cox’s age is 28. Her parents raised her and her two brothers in Dorchester, New Jersey.

Cox earned a degree in elementary and special education from Lebanon Valley College in Annville, Pennsylvania. She went on to work as an elementary school teacher in New Jersey.

This young beauty also loves working with charities and is involved in a few Los Angeles Angels charity programs, including the “Fill the Boot” program for fire departments in Southern California.

Our guys clean up quite nicely! Such a beautiful night at @pelicanhillresort supporting the Angels Baseball Foundation! ?⚾️??? #abfgala

Mike Trout and Jessica Tara Cox met in high school, and the two have been together ever since.

They got engaged over the Fourth of July weekend in 2016, after Trout made quite the epic proposal! He hired a plane to spell out “Will you marry me Jess?” across the beautiful blue sky!

Trout and Cox got married in a spectacular ceremony. Trout shared a lovely photo of the two of them under the picture-perfect starry sky. Being the weather geek that he is, we are sure Trout was delighted with all the snow at his wedding!

From this day forward, you shall not walk alone. My heart will be your shelter, and my arms will be your home. I love you, my WIFE!

How lovely is this black and white picture that Cox shared on her Instagram?

Most of Jessica Tara Cox’s hot pics can be found on her own social media channels, but there’s a pretty “cheeky” one of her that we found on Trout’s account! It looks like it could be one from their honeymoon, giving us all vacation goals. He simply captioned the photo, “Views.” Looks like he’s got a great sense of humor, too!

Jessica Tara Cox’s Instagram is where she shares all of her adventures with the world. You’ll see pictures of her and Trout hanging out with family and friends, while simply enjoying life.

That’s a wrap! Such a fun weekend celebrating our little bride-to-be ???? Can’t wait to call you my “sister” soon! #idocrew #laurslastsplash

S H O U T I N G the happiest of happy birthdays to my sister [ i wish ], my person, my MOH, my best friend! I love you more than puppies ?, sweater weather ?, and even more than coffee ☕️! [ that's a WHOLEEE lot ? ] Idk where I'd be in this world without you. Ps. You're still older than me, Gran ?? Xo

How cute are these family pictures of the three of them? We are in love!

H a p p y T h a n k s g i v i n g from my little family to yours! ?? #countingmyblessings #nextstopthealtar #trouttribe

Caught Up in the Weather

Cox has been by Trout’s side for a long time now and often takes to Twitter to cheer on Trout’s baseball games. But when it comes to his weather obsession, she doesn’t seem to be a big fan!

He’s about one weather map photo short of me muting his text message alerts… ??‍♀️? #theobsessionisreal

When prominent meteorologist, Jim Cantore applauded Mike Trout’s knowledge about the weather on Twitter, Cox was quick to point out that Trout has been keeping a watchful eye on the most recent storm in the Northeast. The storm has been dubbed a “bomb cyclone” and Trout is fascinated by it. He has been giving her regular updates—maybe too regular, as he’s blowing up her phone with weather updates any chance he can get! A self-proclaimed “weather geek,” Trout finds everything to do with the weather fascinating, and if he wasn’t playing baseball, it’s possible he may have been a meteorologist!

The weather outside may be frightful, but Mike Trout and Jessica Tara Cox sure make a delightful couple!