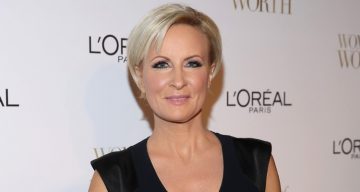 It’s official! Mika Brzezinski and Joe Scarborough are engaged! The couple, who co-host MSNBC’s Morning Joe, have been the subject of many rumors regarding an off-air relationship. But now, the secret’s out and Mika Brzezinkski’s husband will soon be the man she’s been co-hosting the popular morning show with for years. We’ve got all you need to know on the blonde beauty, including information on her age, net worth, engagement announcement, career, and more in our Mika Brzezinski wiki!

From Her Polish Roots to Her Burgeoning Career

Mika Brzezinski was born in New York City, to parents who were of Polish and Czech descent. Her father was Zbigniew Brzezinski, a foreign policy expert and former National Security Advisor. Her mother, Emilie Anna Benesovà, was the grandniece of Czechoslovakia’s former president, Edvard Benes. Mika’s father was a professor at Columbia when Mika was born, but when he was named National Security Advisor by the newly elected President Jimmy Carter, the family moved to a town in Virginia closer to Washington D.C. in 1976.

During her high school days, she attended The Madeira School and then went on to graduate from Williams College in Williamstown, Massachusetts with a major in English.

Mika Brzezinski’s career in journalism began in 1990, when she was an assistant at ABC’s World News This Morning. She moved on to work with a Fox affiliate news station in Connecticut, where she became a general assignments reporter. From then on, she continued to improve her career working for various news networks. In 1997, she joined CBS network news as a correspondent and anchor for their overnight Up to the Minute new program.

I am so proud to announce the release of the children’s book….The Mystical Computer!! Written by our very own Know Your Value Grow Your Value winner….92-year-old Mary Zaharko! Proceeds from the book go to Alzheimer’s Research! Now on Amazon…We loved her submission to the KYV BONUS COMPETITION so much that we honored her on stage in Orlando #knowyourvalue

After a brief hiatus, she went on to work for CBS rival, MSNBC, but made her return to CBS News in 2001. It was during this time that Brzezinski rose to fame for her coverage in New York City during the traumatic attacks on 9/11, as she reported live from the scene when the South Tower of the World Trade Center collapsed.

During her time with CBS News, Mika Brzezinski served as a CBS News correspondent, a substitute anchor, as well as a segment anchor for breaking news stories and routine updates. She was subsequently fired from CBS News and went back to MSNBC, lending her hand to different areas of the news network and appearing on several of their news programs. But she resigned from all other shows when Joe Scarborough offered her the position of being his co-ancho on Morning Joe. The two have been a staple in morning news for years, and clearly their chemistry was evident even off the air. People couldn’t help but fall in love with this dynamic morning duo, and with their recent engagement news, fans are just as excited!

Morning Joe had a spirited debate over what staff member should be fired for giving the candidate’s wife a plagiarized speech to read. #rnc2016

Obviously, the woman’s a babe and is looking as youthful as ever, especially with the recent news putting a new bounce in her step. But if you head over to her Instagram account, don’t expect to find any Mika Brzezinski bikini pics! She’s littered her account with pictures of the things she loves, including her family, and her beautiful daughters.

So, if you’re searching for Mika Brzezinski’s hot pics, the hottest one you might find is of her cat, bathing in the sun! She has strong values and an obvious love for nature, her family, good food, good people, and obviously her cat and dog!

She’s Walked Down the Aisle Once Before

Mika Brzezinski was married once before. Earlier in her career, she married another news reporter named James Patrick Hoffer during the time they both worked for the same cable news station. The two married in 1993, but divorced in 2016. Does Mika Brzezinski have children? Yes, in fact! Though the two didn’t work out, Brzezinski and Hoffer share two young daughters together, Emilie and Carlie. Mika Brzezinski’s divorce and subsequent engagement seems sudden to some, and caused a bit of speculation about a possible Mika Brzezinski affair with her new fiancé. But people are always going to have their opinions, even when there’s no evidence. What is evident, however, is that Mika looks happier now than ever!