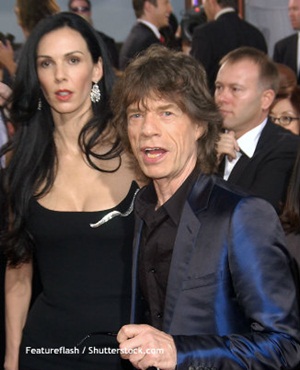 Mick Jagger is the definition of rock and roll. As the founder and front man of the iconic band Rolling Stones, Jagger’s unique voice and guitar style have defined the group’s success since first forming in the early 60s.

Despite the massive success of the Rolling Stones, Jagger has been the subject of a lot of media scrutiny over the years because of his personal life, including his promiscuous behavior with women. Jagger’s first marriage dissolved in 1977 after his wife caught him having an affair with model Jerry Hall. Jagger and Hall continued seeing each other, eventually marrying 13 years later in 1990. It turns out that the ceremony was never official, and after having four children together, their marriage was annulled in 1999.

In 2001, Jagger started dating fashion designer L’Wren Scott after meeting her at a photo shoot. While Jagger is closing in on 70 years old, Scott hasn’t even hit 50 yet. And their age isn’t the only gap between them—Jagger stands tall at 5’10”, but Scott stands even taller at 6’3”.

Although their relationship has sustained over 12 years, Scott has struggled with being labeled as just a rock star’s arm candy. “I’m a fashion designer. I don’t want to be defined as someone’s girlfriend. You always wonder if people will pay attention to the hard work that goes into what you do,” she said.

At least Scott won’t have to worry about being defined as his wife, because Jagger has made it pretty clear that he’s not interested in marriage again. “To be honest, I don’t really think much of marriage. I’m not saying it’s not a wonderful thing and people shouldn’t do it, but it’s not for me,” says the singer, adding, “I don’t really subscribe to a completely normal view of what relationships should be.”

Sadly, their May-December relationship came to a tragic end on March 17, 2014, when L’Wren Scott took her own life. Her body was found hanging from a doorknob by her assistant, whom Scott had texted just a couple hours earlier, asking her to come by. No foul play was detected, and because there was no note left behind, we don’t know for sure what led to her tragic end. Insiders suspect it may have had something to do with her struggling fashion career.