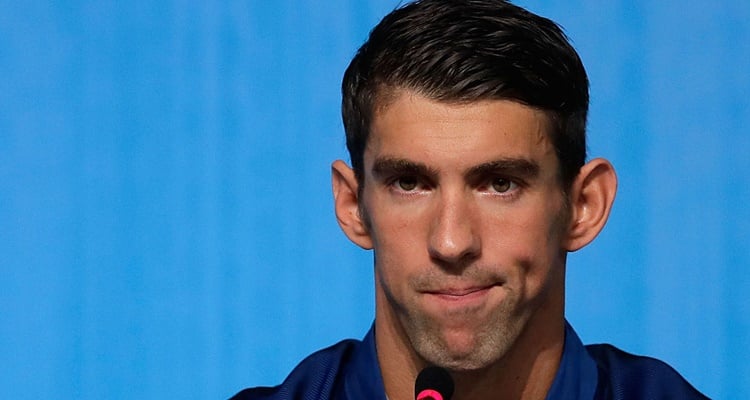 Michael Phelps and his fiancée, Nicole Johnson, reportedly tied the knot several months ago in a secret ceremony. Here are all the details known about the secret wedding.

Olympic swimming champion, Michael Phelps has apparantly been married to Nicole Johnson for months. News of the wedding were reported on Wednesday (October 26) that the couple have been married since June 2016. According to reports, Michael Phelps and Nicole Johnson got married in a private ceremony in Paradise Valley, Arizona before the Rio Olympics. The ceremony was officiated by Phelps’ agent and close friend, Peter Carlisle.

The couple’s son, Boomer Robert Phelps, was born this past May, one month after the ceremony reportedly took place. The two had gotten their marriage license in Arizona on June 9. June 14th is when the wedding is said to have been held in Paradise Valley, where the swimmer had purchased a luxurious $2.5 million home last year. Johnson had even posted a picture of their small family wearing casual clothes and standing by the pool. Many are speculating that the picture was taken after the ceremony.

Such a memorable night with my lil fambam ???????? boomer obviously didn’t want to hold still????

The couple met in 2007 at the ESPY awards in Los Angeles, when Johnson had won the Miss California U.S.A. Pageant. They’ve had an on-gain, off-again relationship since then. They temporarily broke up in 2012 but rekindled their romance and were engaged in February 2015.

The couple has not publicly acknowledged their marriage, with Phelps saying during the Rio Olympics this summer that he was still just engaged. In August, he told People that he was looking forward to getting married, “She’s really good for me. I really can’t wait to get married. It will be a small destination wedding later this year.” He also said in that interview that he retired from competitive swimming, and intends to contribute to the sport in other ways. He’s more focused on raising his son, and working further on the Michael Phelps Foundation, which allows children to live healthier and more active lifestyles by swimming.

Johnson also had an interview in August where she reiterated they intend to have a private ceremony, “We have a date. It’ll be small and intimate for the wedding, and then we’re throwing a massive bash for everyone in the States. We’re kind of getting things rolling. I’ve been planning as we’ve been leading up to this. I think I have the wedding in order and now it’s on to the party for the fun!”

Phelps’ fans have taken to Twitter to express their surprise at the sudden news. Everyone is happy but still reeling from the shock.

When you find out Michael Phelps got married on the DL back in June @SwimWithIssues @swimswamnews pic.twitter.com/JCAFePRWel

Congrats to @MichaelPhelps and the beautiful @MissNicoleJ on getting married! I wish you both nothing but love & happiness!! ???????????? https://t.co/uMQPiGbn9t

Was it just me or was @MichaelPhelps wearing a wedding ring in his last @facebook Live post?! #secretwedding

If the couple is, indeed, married, then we offer our belated congratulations!