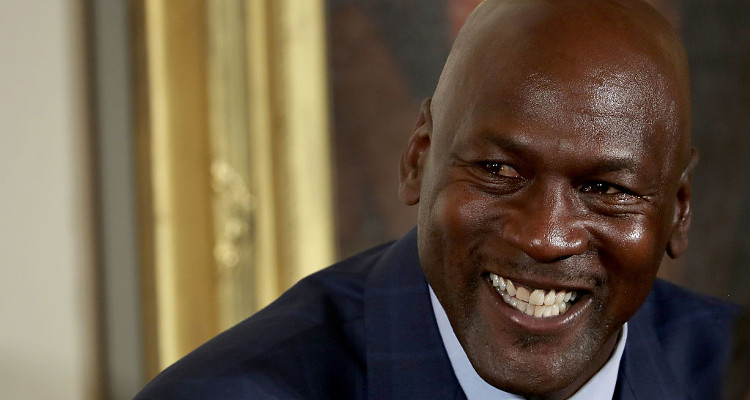 Despite having retired from professional basketball in 2003, NBA superstar Michael Jordan net worth has risen to an astounding $1.1 billion. (yes, BILLION). While those lucrative NBA contracts might be nice, actual team ownership and a slew of endorsement are even better for your net income. The world’s first black billionaire athlete, Michael Jordan is a man who really knows how to market himself (even if we’re still waiting for a Space Jam sequel).

Born in Brooklyn, New York and raised in Wilmington, North Carolina, Michael Jordan first started playing basketball, along with baseball and football, in high school. Kept off the varsity basketball team due to being too short, Jordan spent most of his time training and became the star of the junior varsity team as a means of proving himself before growing four inches the next year, at which point he was deemed eligible for the varsity squad.

Scouted by numerous NCAA teams upon completing high school, Michael Jordan eventually went to the University of North Carolina on a basketball scholarship, joining the North Carolina Tar Heels. In 1982, at the end of the NCAA Championship game, Jordan landed the jump shot that won the game and the championship for his team, something he called an important moment for his career. A couple years and awards later, Jordan would leave school early to be entered in the 1984 NBA draft. The Chicago Bulls would pick him as a third-round draft pick, only not taking him in the first round because the team required a center (Jordan played shooting guard and small forward).

The 1984-1985 season, Michael Jordan’s very first in the NBA, proved very lucrative. Voted Rookie of the year and receiving so much attention that the players wouldn’t pass to him during the All-Star game, Jordan proved he was a force to be reckoned with on the court—and corporations noticed. Despite being a rookie, 1984 saw two of Jordan’s first sponsorships—he reportedly earned $200,000 out of an endorsement from Chevrolet and an additional $12.5 million from a five-year deal with Nike. The Nike partnership would prove to be very important to Michael Jordan’s net worth, leading to the massively popular Air Jordan sneakers and many appearances in commercials and other ads over the years. Jordan continues to have an endorsement deal with Nike to this very day.

Jordan’s fame (and endorsements) rose to unheard-of levels when he led the Bulls to three straight NBA championships in 1991, 1992, and 1993. His salary with the Bulls also rose to meet his fame and skill, going from $2.2 million in 1990 to $4 million in 1993. Jordan would later temporarily retire for a number of reasons and try his hand at professional baseball with a minor league affiliate of the Chicago White Sox; the Bulls and Red Sox are owned by the same person, who added to Jordan’s wealth by continuing to honor his NBA contract. In 1995, he returned to the NBA, leading to another “three-peat” championship run with the Bulls in 1996, 1997, and 1998. By the end of the 1998 season, his contract earnings had jumped to upwards of $33 million.

Michael Jordan then retired a second time in 1999. In 2000, he became partial owner and President of Basketball Operations with the Washington Wizards, though his ability to manage a team was put into question. Then, in 2001, he began playing for the team, earning no more than a “modest” (by his standards) $1 million a year. However, the Wizards did not fare well even with his help and he was openly critical of his teammates. In 2003, Michael Jordan finally retired for good (at least, as of this writing) and was fired from his President of Basketball Operations position soon after.

Michael Jordan continues to gain wealth even after his retirement from his numerous endorsement deals, which include Nike, Gatorade, 2K Sports, Upper Deck, Hanes, Five Star Fragrances, Presbyterian Healthcare, and more. These deals made him a whopping grand total of over $500 million from 2000 to 2012.

The other real money comes from his shares in the Charlotte Hornets, having purchased a minority stake in 2006 before obtaining a controlling interest in 2010. His 80% stake brought Jordan $252 million in 2013, and an additional nine percent purchase within the following year brought his assets to $416 million; this marked him finally becoming a billionaire.

The long-time Nike deal, which saw Jordan’s brand shoes making the company $2.6 billion in 2014, brought the retired NBA star an additional $100 million. It is estimated that, if sales continue as they have, Nike will be paying “Air Jordan” $200 million in royalties by 2020. If that doesn’t say anything about Michael Jordan’s net worth, we don’t know what does.