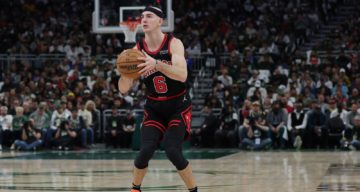 Alex Caruso #6 of the Chicago Bulls takes a three point shot against the Milwaukee Bucks in the second half of Game Two of the Eastern Conference First Round Playoffs at Fiserv Forum on April 20, 2022 in Milwaukee, Wisconsin. NOTE TO USER: User expressly acknowledges and agrees that, by downloading and or using this photograph, User is consenting to the terms and conditions of the Getty Images License Agreement. (Photo by Stacy Revere/Getty Images)

As the Chicago Bulls are on nail-biting run in the 2022 NBA Playoffs, the attention is on the franchise’s latest signee, Alex Caruso. The point guard came from the Los Angeles Lakers in 2021, bringing a new WAG that Bulls fans have been curious about. Shortly before he signed the new contract, Alex Caruso revealed his new girlfriend, Mia Amabile. Prior to that, Amabile had earned a following of her own because of her style and stunning looks. Now her growing legion of followers who are discovering her through her boyfriend want to know more about who Alex Caruso’s girlfriend is. So we reveal her background in this Mia Amabile wiki.

Mia Amabile was born on June 19, 1996, and hails from Pennsylvania. She is the daughter of Laurie Zuccarini and Michael Amabile.

Mia’s parents are apparently separated. She has at least one brother, Christian Amabile. From her social media, it appears she is very close to her mom, with whom she travels often.

After graduating from the Shipley School, Mia Amabile came to California where she attended San Diego University from 2014 to 2018. She had internships and part-time jobs and also did a an exchange program at Griffith University in Australia.

Among her internships, Amabile was a social media marketing intern at Project Social T. She was also a wholesale manager for a swimwear brand.

Amabile graduated in 2018 with a degree in business/commerce. She’s since been in the social media marketing field both as a branding strategist and an influencer. As of 2018, she is a social media coordinator for LF Stores.

On Instagram, she boasts over 261K followers and growing and has partnerships with brands like the retail fashion company, Revolve. It is estimated she earns over $700.00 per sponsored post.

She also has off and on activity on her eponymous YouTube channel where she has over 29K subscribers.

Former Lakers guard Alex Caruso was previously dating another social media strategist, Abby Brewer. There was not much known about their relationship before it ended quietly.

In late 2021, Caruso reportedly had a new girlfriend. Shortly before he signed a $37.0 million contract with the Chicago Bulls in August, he went Instagram official with his new romance. In the days leading up to the official announcement, there had been some flirty interactions in the comments section.

The new girlfriend who appeared in his Stories was identified as Mia Amabile, the Instagram model based in Miami and Los Angeles. Amabile also followed it up with a post on her official Instagram.