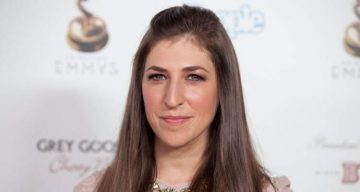 Michel Stone is an extremely private person, so not much information is available about him. However, we were able to unearth some facts. Read all the latest information about Mayim Bialik’s ex-husband in Michael Stone’s wiki right here.

Mayim Bialik and Michael Stone got married in a very traditional ceremony way back in 2003. The marriage lasted nine years and ended in 2012, and the couple have two sons.

Bialik is a practicing Jew, and Stone decided to convert before marrying her.

I have so many scenes with Simon Helberg in tonight's episode as he and Amy team up on a project and Sheldon gets a tad jealous!! Tune in to @BigBangTheory_cbs tonight to see how the group handles this new dynamic!

Before the conversion, Stone was a practicing Mormon. Currently, there is no confirmed news as to whether he converted back to Mormonism or if he’s still practicing Judaism.

According to Daily Mail, “Micheal – who was born a Mormon but converted to Judaism for his wife – was given their 1,300-square-foot, three bedroom home in nearby Sherman Oaks” after the couple’s split.

Michael Stone’s pics are quite rare to find on the Internet. He mostly stays out of the public eye and seems to be a private person.

Stone and Bialik were deeply into “attachment parenting.” This type of parenting has been criticized by many, but the couple seem to be raising their children in this manner, even though they are now divorced.

Mayim Bialik and Michael Stone’s kids are aged nine and 12. They are now concentrating on raising their two boys in the best way possible.