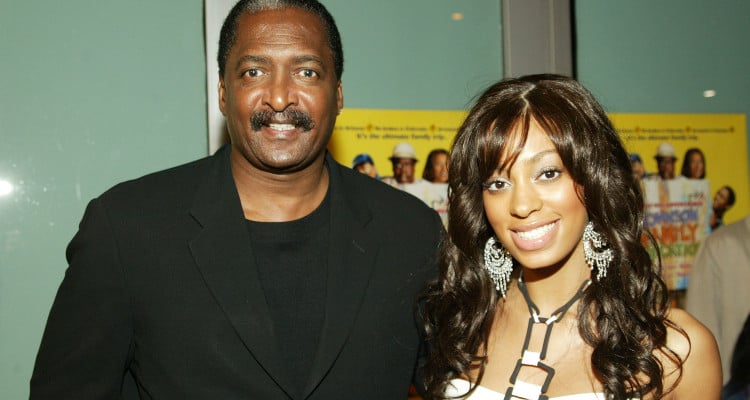 Beyonce and her sister, Solange Knowles certainly have talent in their genes. This time, Queen Bey’s little sister is taking the spotlight with her new album, A Seat at the Table. Her new album is gaining a lot of attention for dealing with Black identity. The album comes at a time when racial issues are widely discussed and the album contains interludes from her parents and the difficulties they faced for being Black. With all this excitement on the album, fans are probably wondering about the Knowles family, especially about their father, Mathew Knowles. For curious fans, we have all you need to know about Mathew Knowles, including his net worth, new group, wife and children.

Here are some interesting facts about Solange Knowles and Beyonce’s father, Mathew Knowles.

He Started with Sales

Mathew Knowles first worked at McDonald’s before landing a job in the medical systems sales division of Xerox Corporation. He sold CT/MRI diagnostic imaging equipment to hospitals and health facilities for 10 years. In 1992, he started his music company, Music World Entertainment. He launched his daughter, Beyonce’s career with Destiny’s Child and the group became the most successful artists signed to the label. Even though Destiny’s Child disbanded, he still claims to manage the group. He plans for a reunion tour and a movie on the group. He launched new girl groups, Blushhh and From Above after Destiny’s Child.

His Net Worth Declined Considerably

In 2012, Mathew Knowles’ net worth was a whopping $50.0 million due to the fact that he ensured himself a hefty paycheck for managing Destiny’s Child and specifically, Beyonce’s career. His demanding ways conflicted with the members of Destiny’s Child, causing Kelly Rowland, Michelle Williams, LeToya Luckett and LaTavia Roberson to depart from the group one after another, and the group’s ultimate disbandment. He also had an unsteady relationship with his daughters owing to his infidelity to their mother, Tina Knowles, and because he took a large share of Beyonce’s income to fund his lavish lifestyle. After conducting an audit of her father’s accounts, Beyonce found that he was stealing money from her. She took a stand to separate her personal life from her career and fired her father as her manager. The 64-year-old is still credited as an executive producer on her albums, but their relationship is not as strong as before. His finances took quite a hit as well. In 2015, his net worth was reduced to $500,000.

He Had an On-Off Relationship with Tina Knowles


Mathew and Tina Knowles have had a strained relationship even before their 2009 split. According to a timeline of Beyonce and her father’s relationship since her birth by Cosmopolitan, Mathew and Tina Knowles briefly split when Beyonce was only two months old. After financial troubles, the family split again and he demanded an increase in his share of Destiny’s Child’s income. This was the point his and Beyonce’s relationship with her father took a turn for the worse. Mathew Knowles was a good businessman but his sex and drug addictions reportedly led him to make poor financial decisions. Beyonce was in the dark about her father’s escapades, while the man faced several lawsuits including those from former Destiny’s Child members. In 2009, with Beyonce’s groundbreaking album I am… Sasha Fierce came some unwanted drama. It was revealed that he had been unfaithful to Tina Knowles and had fathered a child. Consequently, she filed for divorce but the split was friendly and they continue to remain business partners.

In 2009, Alexsandra Wright had filed a paternity lawsuit against Mathew Knowles, which led to Tina divorcing him. Wright’s son, Nixon was confirmed to be Knowles’ via a DNA test. In 2014, TaQoya Branscomb also won a paternity suit against Knowles. He has a daughter named Joi from TaQoya. His escapades must have not sat well with Beyonce and her sister. That is probably why his daughters didn’t attend his wedding to Gena Avery.

He Has Four Children in Total

Besides 35-year-old Beyonce and the just-turned-30 Solange Knowles, their father has two love-children from Alexsandra Wright and TaQoya Branscomb. Wright’s son, Nixon Knowles is six years-old and Branscomb’s daughter, Koi is four years-old. These two children don’t have much of an age difference from his grandchildren; 11-year-old, Daniel Smith Jr. and four-year-old, Blue Ivy Carter.