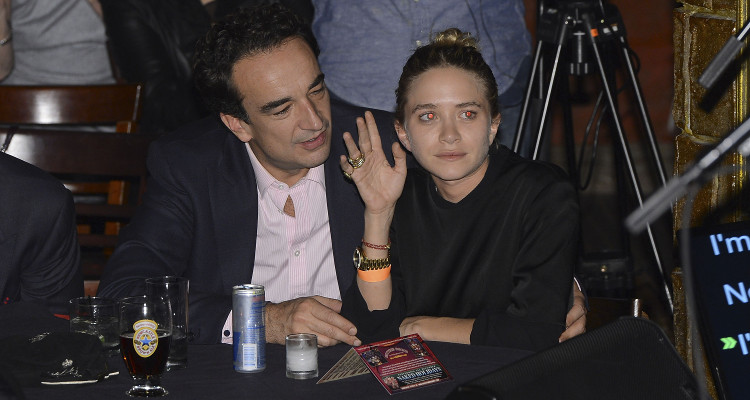 In one of her rare public appearances, Mary-Kate Olsen arrived at the “Take Home a Nude” auction with her husband, Olivier Sarkozy at Sotheby’s in New York. Earlier this year, Olsen spoke about her mostly private life, “I have a husband, two step-kids and a life; I have to go home and cook dinner.” She added, “I run on the weekend. You find the thing that helps you relax and if you don’t have it, you have to look for it. Or you get burned out and then you’re not productive.” Fans of the star love spotting her in public —especially when her husband is by her side! Keep reading to know more about Olivier Sarkozy.

Born on May 26, 1969, in Boulogne-Billancourt, France to Pal Sarkozy de Nagy-Bocsa and Christine de Ganay, Olivier Sarkozy’s age is 48. He has three half-siblings from his father’s first marriage, one of whom is Nicolas Sarkozy, a former French president. Sarkozy’s parents divorced when he was seven, and his mother married an American diplomat.

Most of his childhood was spent outside of France. In fact, he lived in Egypt, Zambia, and even studied in a boarding school in the U.K. before attending the University of St. Andrews and graduating with an M.A. in medieval history.

Rare public appearance: #MaryKateOlsen, 28 and fiancé #OlivierSarkozy, 45 cosied up for a photo as they attended the Paddle & Party for Pink fundraiser in the Hamptons ?#reinaroyale

Olivier Sarkozy’s net worth is estimated to be $60.0 million.

His career started in finance in 1990, when he was hired by American investment bank, Dillon, Read & Co. Three years later, he resigned to start working for Credit Suisse First Boston.

In 2003, Sarkozy worked with UBS Investment Bank where he was Global Co-Head of the Financial Institutions Group. Five years later, was became Co-Head and Managing Director of the Carlyle Group’s Global Financial Services Group, resigning after being at the post for eight years.

Before meeting Full House star Mary-Kate Olsen, Sarkozy was married to Charlotte Bernard, a freelance fashion writer who authored children’s books. They tied the knot in the 1990s, and their wedding was officiated by Nicolas Sarkozy, who at the time was mayor of Neuilly-sur-seine. After nearly 10 years of being together, Bernard said that the two are not really fans of society events, “but we don’t go out and socialize just to socialize. We are really boring people.” Sarkozy and Bernard have two children together.

Their marriage came to an end in 2010, with the divorce being finalized the following year, but the reason for their split was not disclosed.

Sarkozy and Mary-Kate Olsen started dating in May 2012. Despite their 17-year age difference, the two could not help but fall in love. They first went public with their relationship during a New York Knicks game in 2012.

In no time, it looked like Olivier Sarkozy’s daughter bonded with Olsen, as they were spotted quite a few times in public. It was reported that Sarkozy’s ex-wife was not happy with his and Olsen’s relationship, “That’s not right. It’s grotesque.” Sources claimed at the time, “Charlotte certainly won’t want her kids to be around Mary-Kate, who has a history of wild-partying and booze binges.”

In 2014, it seemed as though things were getting serious between the banker and fashion designer, as rumors of them getting engaged began to make the rounds. A source close to the couple claimed that they were engaged for a while before the news came out. Sarkozy and Olsen took their relationship to the next level in 2015. They had a small ceremony in a private apartment in New York with almost 50 guests attending. An insider claimed that there were “bowls and bowls filled with cigarettes, and everyone smoked the whole night.”