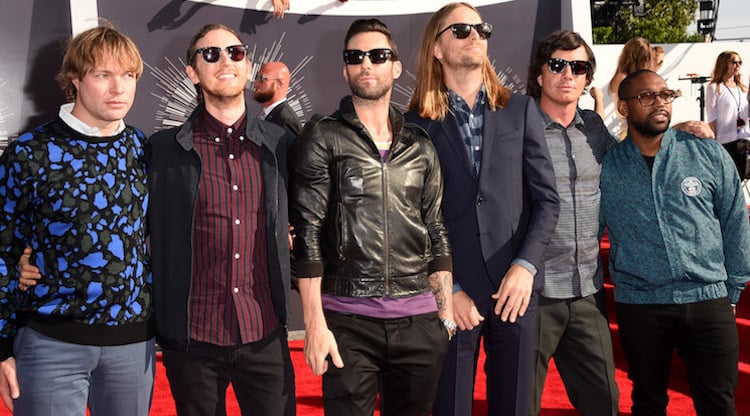 Frontman Adam Levine, 38, announced at the 2017 Teen Choice Awards, after accepting the “Decade Award,” that Maroon 5’s new album in 2017 will be hitting stores and iTunes this November! “Our sixth and final album is coming out in November,” he said, as fans faces turned down with the bittersweet news. “Man, I’m joking. We are never gonna go away,” he said, to their relief. If you want to learn more about Maroon 5’s upcoming album in 2017, here’s what you need to know.

Maroon 5 has not released an album since 2014’s V, and now fans will get to enjoy some new songs by Maroon 5! The sixth album will feature the lead single “Don’t Wanna Know,” as well as “Cold.” Now, fans are anticipating the rest of the Maroon 5 upcoming songs, especially happy with the news that they won’t be their last!

Before joking about the sixth album being their last, Maroon 5 took the stage to accept the “Decade Award.” Levine, along with keyboardist and rhythm guitarist Jesse Carmichael, bassist Mickey Madden, lead guitarist James Valentine, drummer Matt Flynn, and keyboardist PJ Morton, were proud to celebrate their advancements in the music industry over the past 10 years. The band has five multi-platinum studio albums, so far. They have sold over 20 million albums and 70 million singles worldwide. They are one of the top touring acts in today’s popular music, and continue to be a hit worldwide. This awards ceremony in particular honors the year’s top names in music, television, film, comedy, and fashion. Teens select the category winners themselves, revealing which artists today’s youth are raving about. “Thank you guys. I’m not gonna lie: I’m 38 years old. We look really good for 38. We’re not teens, but the fact that teenagers, all of you, can appreciate what we do after all this time… It’s so crazy that we’re still doing this,” said Levine.

Maroon 5 just wrapped up their two-year tour, which ended in March 2017. Now, the band members are enjoying some good old down time from their busy tour life. Levine is enjoying year two of his role as a father for the first time (he and his wife Behati Prinsloo Levine welcomed their daughter Dusty Rose), and working as a coach of NBC’s The Voice. He will be back next month, when the music competition’s 13th season premieres.

If you’re looking for sneak peek Maroon 5 song lyrics from the new album, you’ll have to wait a little longer –but for now, here are some lyrics from past favorite Maroon 5 tunes!