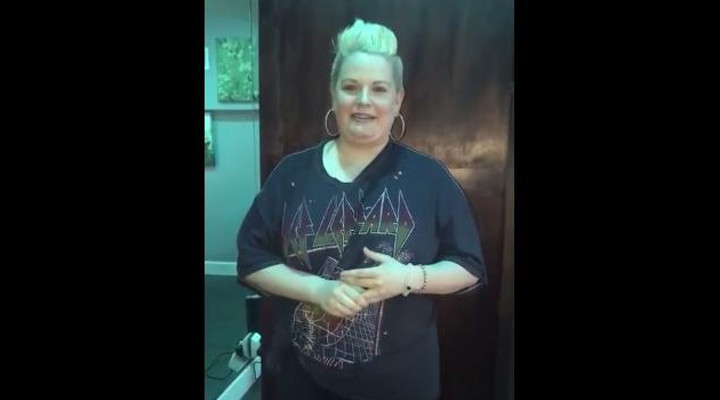 Julianne Hough just gave us all friendship goals, after her dance-tribute performance last night on DWTS. The two-episode finale just saw her tearful tribute to fellow choreographer, Marinda Davis, who was diagnosed with several diseases that have left her seriously ill. Marinda Davis’ Dancing with the Stars tribute now has people wondering about her illness. We’ve got the scoop!

Marinda Davis is bravely battling seven diseases at once, and though the doctors have declared her terminally ill, Davis shows nothing but confidence and courage in her life. The passionate dancer’s medical bills are through the roof, and people in the dance community are trying their best to raise funds for the amazing woman. Here’s a Marinda Davis wiki to help you know her better.

A Passion for Dance

Marinda Davis was just a two-year-old when she began training for dance. She went to the Mary Jo’s Performing Arts Academy, while also studying at Blake High School of the Arts. Davis was just 15 when she toured for her dance performances, and she assisted some well-known names in the dance community like Ray Leeper, Dennis Caspary, and Gus Giordano.

Marinda Davis was a born dancer, and from the age of 18, when she moved to New York, she considered dance as a career. Davis moved from Tampa, Florida to New York on a scholarship, where she attended the Marymount Manhattan College and received a BA degree in Dance and a minor in Musical Theater.

Davis was an assistant to Sheila Baker, while she studied at the Broadway Dance Center (BDC). She performed with Sting, 98 Degrees, and Anthony Morigerato’s company. Though she was into performing all the while, Davis’ focus shifted to teaching and choreographing.

: thanks @wilddanceintensive DC for a magical day of dancing & filming. i know the weight of this mic and treasure this job with all my guts. ?

A Battle With Life

It was a complete shock for Davis to find out that she had not one, but seven autoimmune diseases; lupus, dysautonomia, insulin resistance, an aggressive autoimmune connective tissue disorder, Hashimoto’s Disease (chronic lymphocytic thyroiditis), Cushing’s Disease, and an unidentified gastronomical disease.

But Davis’ terminal illness has not stopped the wonderful woman from living a full life, and she is a huge inspiration to people all across the globe who are suffering from health problems. Many fundraisers and events are being held for Marinda Davis because her medical treatment is what is pushing her ahead.

: it's World Lupus Day. i don't have much more to say about what this disease has taken from me because the list is painful and endless. i am not in a place yet where i can spin this as a positive, as i am still in a deadlock, engaged in a war against a disease i have no control over, on 3 different kind of chemotherapies, and 25 other drugs. what i can control is my hope. i continue to find it even when there's no evidence of it. i continue to HOPE that we can find a cure for this terrible disease. i continue to HOPE we can find a less devastating way to treat this disease. i continue to HOPE people are inspired by my fight in order to fight their own. i continue to HOPE people can see past the exterior. i continue to HOPE for remission. this is me, a few months back. a few things have changed. i have far less hair, but my butterfly rash comes and goes, and my steroid face has begun to go down. i have 50% of my muscle function back. i relearned how to walk. i'm working with my company @marinspired on a full length show. this picture is bittersweet. painful to look at. painful to revisit. painful to repost. painful to think that i live in a town, where the exterior makes or breaks you. i know this is the right thing to post on this day because it's a day for BRAVERY and posting this the first time was the bravest thing i've ever done. posting this again is the second bravest thing i've ever done. i was given this award by the BRAVEST of families. every day, but today especially, i'm thinking of our angel, Maya. this award is what i'm proudest of. how can you help ? text HIGHFIVE to 20222 and an automatic $5 donation will be given to LUPUS LA through your cell phone bill of any carrier. or just share this. the whole month of May is Lupus Awareness month. and awareness is everything. ? #lupus #lupusawareness #lupuswarrior #lupussurvivor #worldlupusday #danceBRAVE

Marinda Davis has her own group called marInspired; the storytellers, and they present their work at well-renowned places like Platform at El Portal, The Giving Tree, and Dancin’ Downtown at the Joyce.

Davis was a recipient of the Capezio Ace award in 2015 given to the best dance teachers every year. She performed her first full-length show in New York called “Breakable,” which sold out before you could say Tango! The group performed at The Salvatore Capezio Theater before the Capezio Ace Award was presented to her.

: i can't believe i just placed at the 2015 @capezio ACE Awards !!! it is such a dream come true. congrats to EVERY single choreographer on an incredible night. it was an honor to stand by all of you. to my cast, i couldn't love you harder. i am so beyond proud of the work you put into this and the artists you are !!! I AM SO STOKED for our 2016 @marinspired show that will be produced by Dance Teacher Summit !!!! thank you. just thank YOU. this has been a helluva year and this piece came from THAT place. #givemeLOVE #UNbreakable ?

The Marinda Davis Fundraiser is hosted by fellow teachers and choreographers, one of whom is Emily Bufferd. “She at one point had been able to teach and choreograph with assistants, but now she, unfortunately, is no longer able, and is currently in L.A. being treated,” said Buffered when asked about Davis.

Davis’ many health issues seem to be just a small hurdle for the “beacon of light in the dance industry.” Dance, in fact, seems to help Davis in her treatment. Her mentor, Sheila Baker is also an avid part of the event.

Davis teaches at the Broadway Dance Center, Peridance Capezio Center, and many more, where she loves to pass on her dancing skills to her teenage and even younger students.

Davis is working with a modern theatrical company called Points of View in L.A. and even did her second full-length “Unbreakable” event in August 2016.

: life changer. • • • #Repost @marinspired ・・・ One year ago today we premiered our company's second full length show, "UNbreakable" at the El Portal in North Hollywood. A day filled with beautiful memories both on and off the stage, that we will hold in our hearts, always. ? #swiperight #UNbreakable #marInspired #CapezioACEAwards

There are very few people who look for positive aspects in troubled times, and no matter how many applauds, praises, and awards Marinda Davis receives, they will never be enough. Here’s hoping a life full of love, dance, fun, and most importantly, good health to Marinda Davis.