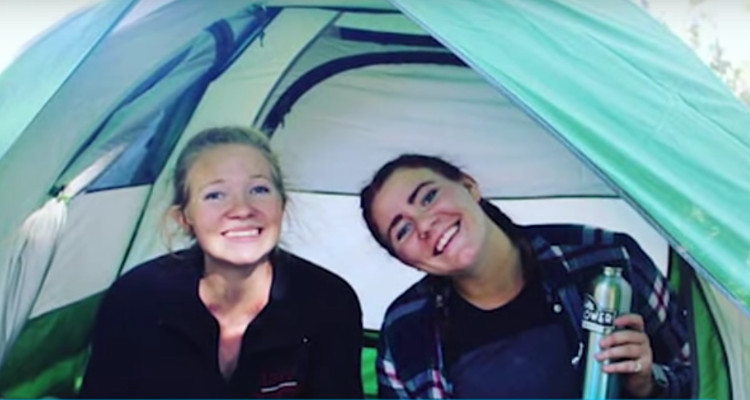 Mariah Brown spent her entire life hiding the fact that she is a lesbian. Finally, she got the courage to come out about her sexuality. Now, she is very happy with her girlfriend, Audrey Kriss, and is flaunting her new relationship all over Instagram.

Coming out of the closet is never easy. It takes courage to overcome a lifetime of fear and uncertainty, to look at your family and friends and tell them the truth. That’s what happened with Sister Wives star, Mariah Brown, when she finally gathered the strength to tell her family and the world that she is a lesbian. In fact, she was so scared of being gay, that for a long time she became a self-proclaimed homophobe. Brown told People magazine, “It was something I was so scared of in myself. If you were to ask me my biggest fear, it would have been to be gay.” Now that Brown has “outed” herself, people are eager to know more about Mariah Brown’s girlfriend in 2017. Brown has posted a picture of her girlfriend, Audrey Kriss, on her Instagram account.

Her Childhood was Conflicted

Brown’s fear of being gay can be traced back to the difficult time she had growing up. She was brought up as a devout fundamentalist Mormon in a polygamous family (her father has four wives), and she struggled to come to terms with her sexuality. She was told by her family that the church’s stand on homosexuality was negative. “I remember being in church, and they talked about how being gay was bad. But none of that came from my parents. It was from church and the people I was around. One bishop told me gay people were selfish,” she said.

Brown tried her best to cope with her feelings, but suffered sleepless nights and panic attacks. Her inner turmoil was tearing her apart. She said, “People say that they try to ‘pray away the gay,’ but I wouldn’t even let myself think the word. I just wouldn’t even go there.” It’s only when she met a college guide while touring schools as a high school student that she found direction. The guide was gay, and he shared his story with her. That’s when Brown realized that it was okay to be gay.

Coming Out of the Closet

Shoutout to @unlvLYMcrew for the dope hat & working toward putting a hat on every child battling cancer pic.twitter.com/DexrNUqIAo

Then, she did the most difficult thing of all; telling her blood family that she is a lesbian. In a January 2017 episode of Sister Wives, Mariah Brown gathered her biological mother Meri, her father Kody, and sister wives Janelle, Christine, and Robyn and told them the truth about her sexuality. Fortunately for Brown, her mother and the rest of her family accepted her news, and continue to love and support her, just the way she is. Meri cried before the cameras and said, “I accept her, I do.”

She’s Free as a Bird

On February 19, 2017, Brown confirmed her relationship with girlfriend, Audrey Kriss on Facebook. Brown also posted an Instagram photo of the two together. The Audrey Kriss Instagram photo has the caption, “When your girlfriend is an artist, so you pretend to art for a day just for her.” Since coming out, Brown feels like she has lifted a huge weight off her shoulders. She has been unable to contain her happiness, and on March 8, 2017, she tweeted about her girlfriend saying, “Shoutout to Audrey Kriss for literally changing my life and showing me that who I am is perfectly okay.”

People have been trying to find hot pics of Mariah Brown on the Internet ever since she came out. However, her Instagram account is private. Brown has found acceptance from her family and love with Audrey Kriss, whom she met at Westminster College. It takes a lot of courage to find love and acceptance, which is why we are so thrilled that Brown and Kriss have done so!