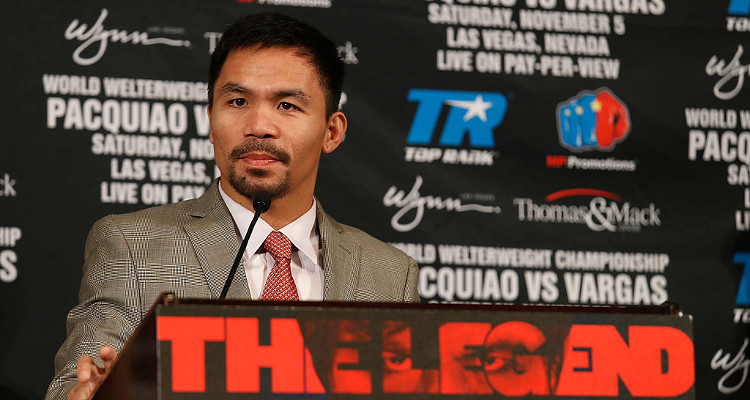 Manny Pacquiao is all set for his rematch with Floyd Mayweather in order to restore his fans’ faith in boxing. Here what you should know about Filipino professional boxer, Manny Pacquiao.

Emmanuel “Manny” Dapidran Pacquiao was born on December 17, 1978, in Kibawe, Bukidnon, Philippines, making him 37 years old. His parents are Rosalio Pacquiao and Dionisia Dapidran-Pacquiao. When he was six years old, his parents separated after it was discovered that Pacquiao’s father was having an affair with another woman. Pacquiao has five siblings, and he is the fourth of six children. His siblings are Liza Silvestre-Onding, Domingo Silvestre, Isidra Pacquiao-Paglinawan, Alberto “Bobby” Pacquiao, and Rogelio “Roel” Pacquiao.

Although he currently stays in General Santos City, South Cotabato, Philippines, he often travels to Kiamba, located in the lone district of Sarangani, where he is the congressman. The Filipino fighter’s height is five-foot-five, and he weighs 144 lbs.

Pacquiao could not complete his elementary school education because of his family’s poor financial condition, as his mother had troubles making ends meet while supporting six children. Due to this, Pacquiao decided to leave his house at the age of 14. In 2007, Pacquiao passed a high school equivalency exam, making him eligible for college admissions.

Having a keen desire to learn, he went to school for a degree in Business Management at Notre Dame of Dadiangas University in General Santos City. In 2009, Pacquiao was presented with an Honorary Degree of Doctor of Humanities by Southwestern University at the Waterfront Cebu City Hotel & Casino in Lahug, Cebu City, due to his boxing achievements and humanitarian work.

Pacquiao was always interested in law, so he enrolled in a Certificate Course in Development, Legislation, and Governance at the Development Academy of the Philippines.

Pacquiao wife is Jinkee Jamora, a former vice governor of Sarangani, in Mindanao, Philippines. She was born on January 12, 1979, and was working as a beauty consultant when she met her husband. The couple tied the knot in 2000 and have five children together: Emmanuel Jr. (Jimuel) Pacquiao, Michael Stephen Pacquiao, Mary Divine Grace Pacquiao, Queen Elizabeth Pacquiao, and Israel Pacquiao.

Manny Pacquiao’s Net Worth And House

How much did Manny Pacquiao make in the last fight? During his last match, he won a whopping $20.0 million! According to Forbes, he is ranked at number 63 for being The World’s Highest-Paid Athletes. His net worth is estimated to be around $200.0 million, with an annual income calculated to be $21.5 million, and approximately $2.5 million earned each year, due to various endorsements and sponsorships.

Pacquiao was elected to the Filipino Senate in May 2016, after he was elected to the House of Representatives. Pacquiao stays in a mansion located in Beverly Hills. His house costs around $12.5 million and includes a gym, home office, swimming pool, and gaming room. He drives an SL500-Class, manufactured by Mercedes, which costs $45,000.

Pacquiao is also the only fighter in the world who has ever fought and won in seven different weight categories. Various awards that were given to this boxer include the BWAA “Fighter of the Year,” and the ESPY Award for Best Fighter.

Pacquiao took an interest in the world of boxing when he was only 14 years old and his talent has saved him from a life on the streets. When he left his mother’s house, he was homeless and received an invitation to join Philippine national amateur boxing team, which guaranteed him a room and a meal. Pacquiao entered the professional boxing arena when he was just 16 years old.

In 2010, Pacquiao made the decision of becoming a candidate in the parliamentary elections in the Philippines. He was credited with a support of the electorate thereby becoming a member of House of Representatives, where he still serves today.