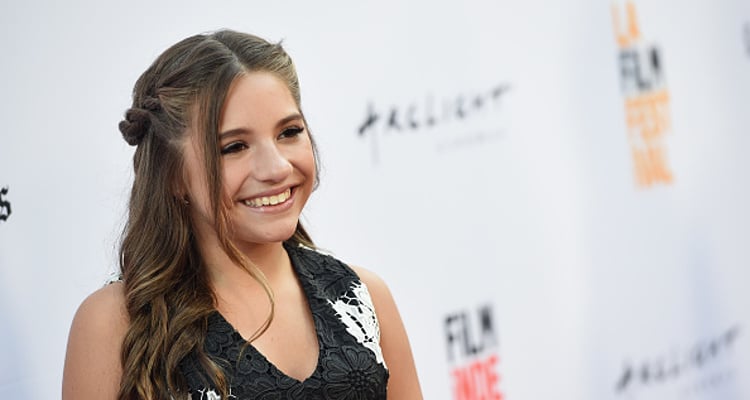 We all know Mackenzie Ziegler from Dance Moms, but do you know her net worth? It’s unbelievable what the 13-year-old has achieved in such a short time! All of her accomplishments are thanks to her talent, and zeal to be in show business. So what’s the dancing star doing now? Here’s all you need to know about Mackenzie Ziegler and her awesome career.

Sisters Maddie and Mackenzie Ziegler are both amazing dancers and so young! They have already seen a lot of success, and are only continuing on their path to stardom. As if they aren’t stars already! Mackenzie Ziegler’s Dance Moms stint ended in 2016 after six long years. Ziegler has improved a lot since then, showcasing her talents and winning a lot of hearts. So what is Maddie Ziegler’s sister doing now? Is Mackenzie Ziegler on tour? If you have these questions, we have your answers right here. Read on to know all about Mackenzie Ziegler’s career.

The Zeal in Ziegler

Mackenzie Ziegler was born on June 4, 2004, in Pittsburgh, Pennsylvania. She is the youngest of her siblings and started dancing at the age of two with Abby Lee Dance Company where she won numerous trophies. Mackenzie Ziegler was the young dancing star on the Lifetime’s Dance Moms where she was first seen in 2011 and stayed until 2016, when she quit the show to take up other projects. Mackenzie Ziegler followed in her sister, Maddie’s, footsteps who was already in Dance Moms. On the TV show, Mackenzie was known for her spunk and very flexible body, and her ability to captivate audiences when she moved on stage. She then went on to appear in Abby’s Ultimate Dance Competition as well as Abby’s Studio Rescue.

She did it again! Ziegler is successfully touring and dancing her way into everybody’s hearts. According to Facebook, the Ziegler sisters started their Australia tour in January 2017, and there is no slowing down for the two. Mackenzie Ziegler is touring in the States as well, in the Day & Night tour with Johnny Orlando, and planned to visit major cities like Baltimore, Houston, and Chicago to name a few. Fans are “shipping” the pair and some even believe they might couple up thanks to #jenzie, which is trending on social media. Well, we can’t confirm anything about the two dating, but they are definitely lighting up the stage together. As of now, tickets seem to be sold out for the tour, but you can head on to Instagram page to see if more dates will be added.

Fans are sure about Mackenzie Ziegler and Jonny Orlando being romantically involved, but the news has not been confirmed. Though Ziegler and Orlando look like they are pretty close, and reportedly hang out in their free time, many are also speculating that she might be dating Hayden Summerall, Orlando’s good friend. But again, Ziegler has kept mum about her personal life and is focussing on dancing, singing, and keeping her fans guessing. After all, imagination is more powerful than reality! As far as Mackenzie Ziegler’s Instagram goes, we cannot be sure who she is snuggling up to!

Or Is it Hayden?

HaPpY BiRtHdAy To this amazing girl????????Hope you have the best Bday ever! ❤️

A little behind the scenes look at the making of #MonstersAKAHaters. Can’t wait for you guys to hear it THIS Friday! #linkinbio

The 13-year-old has done something most of us can’t and it pays off! Mackenzie Ziegler is proof that amazing things come in small packages, and she is reaping the benefits of all her efforts. Ziegler’s net worth is said to be a handsome $2.0 million.

What would you do with that kind of money at 13? Well, Ziegler is definitely putting it into good use. The Dance Moms star reportedly earns an annual income of $600,000 for her performances, social media and TV appearances, as well as her music. Mackenzie Ziegler’s YouTube channel has over 1 million followers and is showing no signs of slowing down, meaning there’s nothing to stop her fortunes from multiplying!