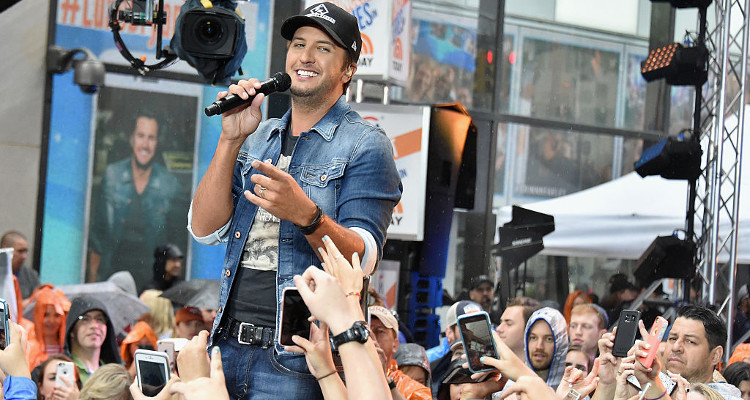 After overcoming family tragedies, Luke Bryan rose to the top of the country music scene singing hit after hit. From writing to songs to performing them, the singer has become a country legend in his decade-long career.

Luke Bryan made the move from Georgia to Nashville to pursue a career in music, after the death of his brother and some encouragement from his father. He made a name as a rising songwriter, but since his debut into the country music scene in 2006, there has been no stopping the 40-year-old singing sensation. His songs appeal to all audiences, who fill an entire stadium to listen to his high baritone vocals. Making this country heartthrob more affable is his signature goofy/sexy hip shake. In his career spanning 10 years, Bryan has produced numerous chart-topping hits and top albums. Here are Luke Bryan’s top songs.

Bryan’s debut song jumpstarted his career and made him into a country superstar. He co-wrote the song with Jeff Stevens and Lonnie Wilson, and released it as a part of his 2007 debut album, I’ll Stay Me. The upbeat country-rock song proved that Bryan is a country crooner with a wild side.

Written by Rodney Clawson and Ashley Gorley, the song was the first single to be dropped from Bryan’s 2013 studio album, Crash My Party. He debuted the song at the Academy of Country Music Awards that same year which he was co-hosting with his pal, Blake Shelton.

This song was the third single from Crash My Party and Bryan’s seventh top hit on the Billboard Country Airplay list. The emotional ballad wasn’t written by Bryan, but he said that he felt the connection between the lyrics and his siblings. The lyrics speak of a person remembering a loved one that passed away by watching the sunset and drinking beer, something they would’ve done together. Bryan performed the song at the 2013 CMA Awards.

“Country Girl” is more of a catchy dance beat than a country tune, and it cements Bryan’s country-rock party animal signature sound. It was critically lambasted, but the song became a dance floor-filler. It was the first single from his 2011 album, Tailgates and Tanlines, and whenever he performed the song, he added those hip gyrations only he could do. Frankly, the song sounds like it was made for those hip-shakes!

The third single from Tailgates and Tanlines prove that Bryan can go from being a country rockstar to a sentimental singer. The song was popular with 20-somethings who had nothing but love on their minds, but also spoke to those across all generations. The song had peaked to number one on Billboard Hot Country Songs.

The song comes from his album Doin’ My Thing. Luke Bryan co-wrote the song and turned into a certified gold hit. It is about a guy who sees his love with another man, and wonders if their relationship is over. The song is praised mostly for its lyrics that perfectly describe the insecurities of the male narrator.

The country legend’s latest album, Kill the Lights had a number of chart-topping hits, including the lead single, “Kick the Dust Up.” The song has Bryan’s tried-and-true party anthem feel and it became Bryan’s 13th top single on the Billboard charts. Bryan announced his new album and performed the song on The Ellen DeGeneres Show, after performing it live during the last leg of his That’s My Kind Of Night tour.

The song is the lead single from Bryan’s 2009 album, Doin’ My Thing. Country trio, Lady Antebellum’s Dave Haywood and Charles Kelley co-wrote the song with Bryan and the group’s lead singer, Hillary Scott was featured as a background vocalist. The song is about a couple questioning their relationship peaked at number two on the both the Billboard Country Airplay and Hot Country Songs charts.

The second single from Kill The Lights to top Billboard and the 14th number one single in his career. Luke Bryan’s signature country-pop-party style gets a sultry spin in “Strip it Down.” He co-wrote the risque lyrics, which are inspired by his wife Caroline Boyer, and it has a sultry yet PG-13 music video to go with it. The song was certified platinum with more than one million sales in the United States.

The third chart-topper from Kill The Lights shows Bryan’s love for the outdoors. The hit-maker has great enthusiasm for hunting and outdoor activities. He even owns an outdoor clothing line called 32 Bridge and stars in a hunting show called Buck Commander. Bryan co-wrote the song with The Peach Pickers, a songwriting team from Georgia. “Huntin’, Fishin’, Lovin’ Every Day” is inspired by the Georgia lifestyle that Bryan and The Peach Pickers grew up in, with a music video featuring his wife and sons. Basically, if you want to see Luke Bryan and his family’s everyday life and put it to music, this is it.