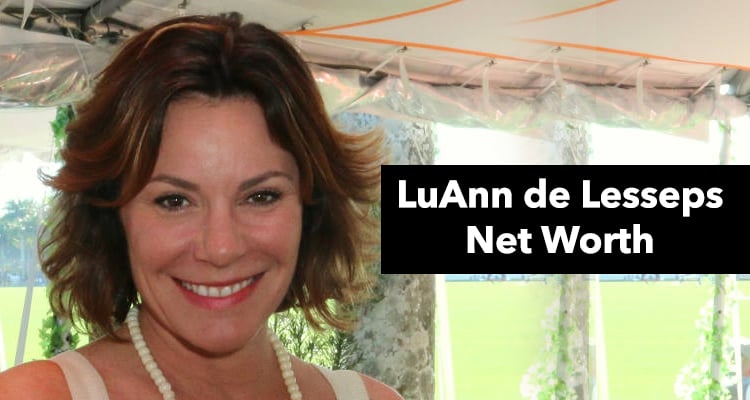 My little Aston in the #hamptons #westielove xo

The 51-year-old model, author, and singer has enjoyed a long and lucrative career. In 2015, Lesseps’ net worth was reported to be around $2 million, but plenty has changed for her since then, including the sale of her Hamptons home.

If you’re wondering what LuAnn de Lesseps’ net worth is now, it is reported to be in the vicinity of $15 million.
[etn-inline-post id=”31377″]

She had a stellar modeling career in her youth, and her marriage to Count Alexandre de Lesseps, an entrepreneur and investment banker, further increased her wealth. He is the descendent of a famous French diplomat, possesses a royal title and is estimated to be worth $50 million. Unfortunately, the RHONY star and the Count got divorced in 2003, and she received the title and his Hamptons farmhouse in the divorce settlement. Lesseps reportedly earns around $20,000 from The Real Housewives of New York. Allegedly, Lesseps sold her $8 million Bridgehampton home and $3 million Sag Harbor home, which might have upped her net worth by a hefty sum.

Hope everyone is enjoying the weekend! Xo

Did Lesseps’ Fiance Tom D’Agostino Jr. Cheat On Her?

Fans following the hit reality series were shocked by recent revelations of Lesseps’ fiance Tom D’Agostino Jr. cheating on her, months before their scheduled new year’s eve wedding. It all started when Lesseps’ fellow RHONY star Bethenny Frankel, showed her photos of D’Agostino Jr. with another woman. Understandably, Lesseps was devastated by the news, after excusing Tom’s troubling drinking behavior in the past. She stormed out of her frenemy’s apartment, after demanding why Frankel went to such lengths to dig dirt on her fiance. Lesseps warned her former BFF to stay out of her business after the latter disclosed the disturbing truth.

Kisses to all from the beautiful city of #vienna

In recent news, Lesseps has decided to put the unfortunate incident behind her and move on with her life. In an interview, she publicly forgave her fiance Tom for his indiscretion. He was photographed making out with an ex-girlfriend at the Regency Hotel bar on the night before their engagement party. Apparently, the couple had a fight before the incident occurred, and Tom stormed out to get a drink. Yikes!

Lesseps stated, “I’m not going to let a stupid kiss ruin the rest of my life. He screwed up. What he did was wrong. But this wasn’t premeditated. It wasn’t an affair. It was a mistake. He was upset with me. It was a stupid retaliation of some sort. He did the wrong thing, and he totally recognizes that. I know in my heart of hearts that he loves me.” Good for you, girl!

Meanwhile, her fiance has apologized for his appalling behavior, and said that he is deeply ashamed for hurting Lesseps. He confessed, “If I could take it back, I would. I deeply regret the mistakes I’ve made, and most of all hate the way it hurt LuAnn.” Awww!