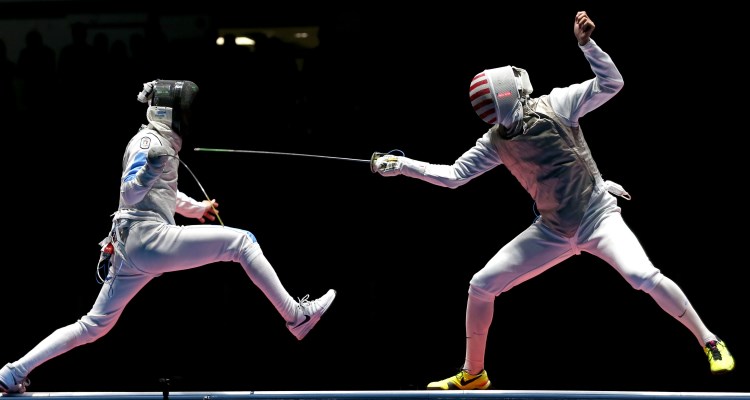 Who says the guys get to have all the fun? In Lee Kiefer’s case, she’s getting all the fun, action, and fame that comes with being an Olympic fencer. In order to know more about Kiefer, many have been searching terms like, “lee kiefer fencing” and “lee kiefer Olympics.” So, we decided to save you time by putting together a few facts about the Olympic fencing star as she’s looking to win gold in the U.S. Women’s foil this year at the 2016 Rio Olympics.

Lee Kiefer was born on June 15, 1994 in Cleveland but grew up in her hometown of Lexington, Kentucky.

For Kiefer, fencing is in her blood and it’s a family tradition. Holding a foil in her hand is as natural as breathing. Other than her mother—Teresa, a psychiatrist, who emigrated from the Philippines as a child—everyone in the Kiefer family has a connection to fencing. Lee’s father, (an American) is a neurosurgeon who once lead the Duke University fencing team as their captain. Lee’s older sister Alexandra fenced while attending Harvard University and is a former NCAA champion. Lee’s younger brother Axel is currently on the Men’s foil team at the University of Notre Dame. We weren’t kidding when we said it really runs in the family!

Kiefer was introduced to the sport at an early age– seven-years-old—and has remained the best in the game every since. And despite not being tall (5-foot-4) or left-handed, Kiefer is ranked number one in the U.S. among women foil fencers. Her fierceness allows her to defeat physically stronger opponents and she never gives up. She trains up to three hours a day, five days a week with her coach.

To focus on the Rio Olympics, Kiefer took a year off school at the University of Notre Dame, where she attends on a fencing scholarship and is pre-med. During her year away from school, she took her MCATs and completed her medical school applications. She told NBC News that she has a slim chance of competing in the 2020 Olympics in order to pursue a career in medicine.

Kiefer enjoys practicing against her boyfriend, fellow foil fencer, Gerek Meinhardt. Meinhardt, whose mother is Chinese, is a member of Team USA’s Men’s Foil Fencing Team and this is his third Olympics in Rio. The couple has several pics on Kiefer’s Instagram account (@leetothekiefer) where they aren’t shy to show how much they care about each other, and fencing, of course.

For more information on the Rio Olympics coverage, head over here.