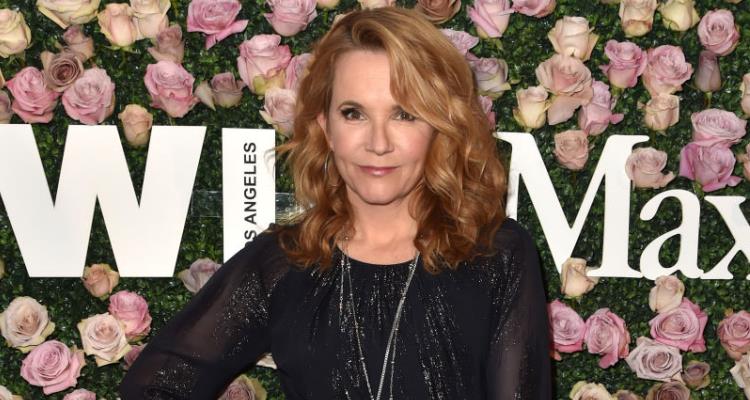 Lea Thompson, age 56, who is most famously known for her role as Lorraine Baines McFly from the Back to the Future trilogy, will be appearing on Sunday’s episode of Celebrity Family Feud, against Sandra Lee and her family. Keep reading our Lea Thompson wiki to find out how the 56-year-old actress got her start in showbiz and other interesting facts about her life!

Who is Lea Thompson?

Thompson is an accomplished actress, producer, and director whose career spans nearly 4 decades. You may recognize her from other notable roles and projects such as Red Dawn (1984), Some Kind of Wonderful (1987), as well as the made-for-TV Jane Doe movies, which she starred in and directed. She’s also widely known for producing and playing the titular character in the hit 1990s sitcom, Caroline in the City (1995-1999), for which she won the 1996 People’s Choice Award for Best Actress in a New Sitcom. There’s no doubt that Lea Thompson is a highly recognizable figure in the film and television industry, having worked extensively in front of the camera and behind it. But, did you know that before she pursued a career in acting, she was a professional ballet dancer? Believe it or not, the Switched at Birth (2011-2017) star is a bona fide Jill of all trades when it comes to the entertainment industry! She’s been involved in countless big and small screen endeavours and she’s even been featured in starring roles on Broadway. And it seems like talent and tenacity run in her family because Lea Thompson’s daughters, Zoey Deutch and Madelyn Deutch (who are also the spitting image of her) are also successfully finding work in Hollywood!

Here’s Lea Thompson with her daughters, Zoey and Madelyn Deutch at the Max Mara Vanity Fair and Women in Film party. The party was in honor of Zoey, who won a Face of the Future Award on Monday, June 12, 2017.

When Lea was younger, her dream was to become a professional ballet dancer and perform with the world renowned Russian dancer, Mikhail Baryshnikov. At the age of 14, she’d even won scholarships to several prestigious ballet schools in the United States, including the American Ballet Theatre (ABT) and she got the chance to showcase her abilities in front of her idol. Unfortunately, he crushed her dreams immediately by telling her that she was “a lovely dancer, but you’re too stocky.” This was a major life-changing moment for Thompson because she was only 20 years old at the time, and realized that her dreams of becoming a professional ballet dancer were unfeasible. So, she decided not to put all of her eggs in one basket and focused on pursuing a career in acting instead. And, boy did it ever pay off!

The Film that Changed Everything

Lea Thompson’s first official acting credit was in Mystery Disc: Murder Anyone? (1982). But, it wasn’t until she appeared as the bikini-clad Kelly Ann Bukowski in Jaws 3-D (1983), when Hollywood executives started to take her seriously as an actress and would seek her out for more roles. Of course, as we all know, the role that made Lea Thompson a household name came about when she was just 24 years of age. Even though she’d already acted in several big movies by the time the first Back to the Future movie hit theaters in 1985, that film propelled Thompson’s career into overdrive. It was the biggest hit movie of the year and even though its two sequels didn’t quite live up to the same expectations, they were still instrumental in cementing Thompson as a 1980’s icon. It was her performances in those movies that caught the attention of Lea Thompson’s husband, director Howard Deutch. He practically begged her to star in his upcoming feature film, Some Kind of Wonderful, and even though she was engaged to actor Dennis Quaid at the time, the two fell in love and she eventually broke off her engagement to marry him. The couple got married in 1989, and have been together ever since.

Upcoming Movies and Net Worth

Lea Thompson is currently working on an upcoming production of Little Women, also starring Lucas Gabreel of High School Musical fame. She’s playing the role of Marmee (Mrs. March). The film is set to be released sometime in 2018 and there’s already a lot of buzz surrounding it.

Here’s Lea with the cast and crew of Little Women to be released in 2018!

Check out Lea Thompson and Lucas Gabreel on the set of Little Women!

I woke up this morning had no idea where or what I was doing. But then JOY I am in #utah making #littlewomen with @mrgrabeel !!!!

As of 2016, it’s estimated that Lea Thompson’s net worth is about $14.0 million, which isn’t too surprising considering the former Dancing with the Stars contestant hasn’t really stepped out of the spotlight, and continues to find lucrative work in Hollywood.