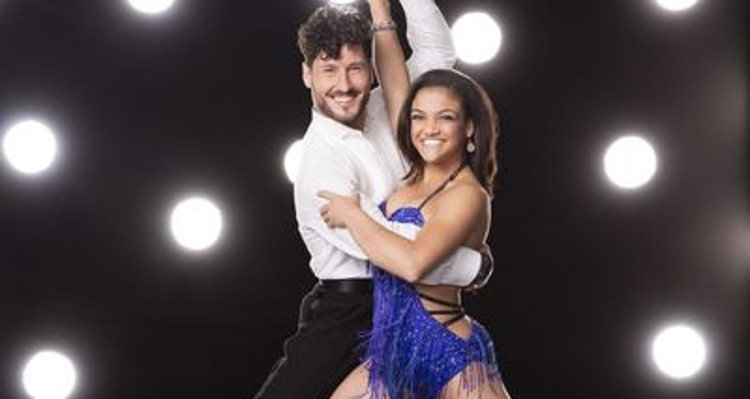 American artistic gymnast, Laurie Hernandez impressed us all with her impeccable performance at the Rio Olympics 2016. After the Olympics, the 16-year-old star is participating on Dancing With the Stars and her partner is professional dancer, Val Chmerkovskiy. Laurie did not fail to amaze the judges and the viewers with the spectacular Cha Cha performance during the premiere of Dancing With the Stars on September 12.

On Monday night (September 12), Laurie Hernandez made her debut performance on Dancing With the Stars and totally wowed the judges. Laurie Hernandez and Val Chmerkovskiy pulled off some great Cha Cha moves and of course Laurie added some gymnast moves to their dance routine. The pair danced to “American Girl” by Bonnie McKee and totally nailed their performance.

Laurie Hernandez and Val Chmerkovskiy were one of the first announced couples on DWTS. When both of them first met each other, Laurie was ecstatic and could not contain her excitement. Val was also excited, as he said he is a huge fan of Laurie. Prior to this show, Val was touring with his brother, Maksim for their own dance show.

Laurie Hernandez is an American gymnast and participated in the Rio Olympics 2016 representing the U.S. She was on the U.S. Women gymnastics team and won a gold medal in the team event and a silver medal on the balance beam. Laurie is confident that her strong gymnastics background will definitely help her win the coveted Mirrorball trophy. Recently, in an interview she said, “So far I’m doing really well! Dancing is so much fun. I’m getting a lot of blisters from wearing heels, but that’s OK! I have worn heels more in the past two weeks than I have in my whole life combined! Today I was walking around in rehearsal and one of the producers was joking with me and said, ‘You’re really working those heels today!’ So I think I must be getting a lot more comfortable in them!”

lost my keys at the Grove yesterday

Valentin “Val” Aleksandrovich Chmerkovskiy is a professional dancer of Ukranian-American descent. He is an amazing dancer and is a two-time World Latin dance champion! He was also the winner of the 20th season of Dancing With the Stars, with actress Rumer Willis. His recent performance with Laurie Hernandez on Dancing With the Stars earned him 31 points.

Apart from participating on DWTS, he is also the co-owner of six dance studios under the name, “Dance With Me.” Val is well-known for his sharp dance moves and he was definitely star-struck when he met Laurie for the first time.

Now that the show has just started, there is a long way to go for the contestants to claim the winning title. If Laurie and Val are your favorite participants, make sure you vote for them if you want them to advance another week! To vote for Val and Laurie, you can call on 1-800-868-3407. Also, keep in mind that from now on, one couple will be eliminated every week, so make sure you save your favorite dancers by voting! In the meanwhile, feel free to check out Laurie Hernandez’s Dancing With the Stars performance and let us know your views about it in the comments section below.