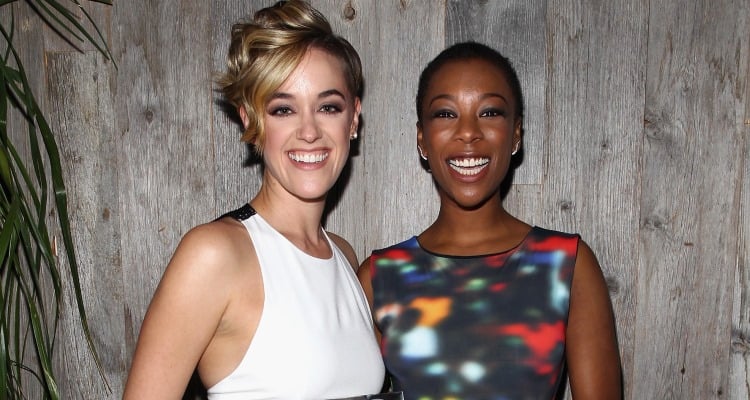 Orange Is the New Black was renewed for an additional three seasons and fans of the show are very excited for season 5! The season 4 finale left viewers with serious cliff-hangers and a shocking end to the last season, which has fans yearning for the new one to begin! To fans disappointment, Poussey Washington will not return to season 5, as the character died in season 4. Poussey was portrayed by Samira Wiley and although her character is dead, Wiley’s real life seems brighter than ever. Samira Wiley’s girlfriend, Lauren Morelli, is sporting some gorgeous new hardware on her left hand and fans are desperately searching for “Samira Wiley and Lauren Morelli engaged” news. If you’re wondering what happened to Lauren Morelli’s husband, Steve Basilone, the couple filed for divorce in 2014. For more details about the brand new happy couple, here’s what you need to know.

Lauren Morelli, writer of Orange Is the New Black, received a lot of attention after she filed for divorce from her husband, Steve Basilone. EW reports that Morelli began to notice her self-doubt about her marriage and her sexuality, while writing a love scene for Orange Is the New Black. She explains, “I was nervous about the first love scene I’d written for Alex and Piper. I’d loved writing it, loved watching a tenderness emerge in their relationship where passion always seemed to be the ruling principle, but by that time, I was so deep in my own self-doubt that I constantly felt like a fraud, I was sure it was bleeding into my writing. How could it not? I was married to a man, but I wasn’t straight.”

She Wrote a Coming out Essay

While working on the hit Netflix show in 2012, Morelli realized that she was attracted to women and decided her five-month marriage was all wrong. In September 2014, people began to find out that she left her husband to date Samira Wiley, who played the role of Poussey on the show. To make things extra official, Morelli wrote a coming out piece for IdentitiesMic in May 2014, and since that day she has been exclusively lesbian. She wrote, “I am now out to my family, my friends, and most of my co-workers on Orange (and now to you, dear reader). Now, when I am in the writers’ room or on set, I no longer feel like I am stuck in the middle of two truths.”

Morelli expressed her happiness with being open about her sexuality. She said, “I went through it all on set: I felt in love with a woman, and I watched my life play out on screen. . . It feels liberating and appropriate to live my life in front of you.”

Social media has become the most popular and effective way to share information and Lauren Morelli’s Instagram photo served as her breaking news outlet when she asked for Wiley’s hand. Morelli proposed to Wiley on October 4 and posted the photo on her Instagram account with a heart symbol as the caption. Samira Wiley’s Instagram shows the same photo with the caption, “Yes.” It turns out the couple is taking their relationship to the next level, and we couldn’t be happier for them both!