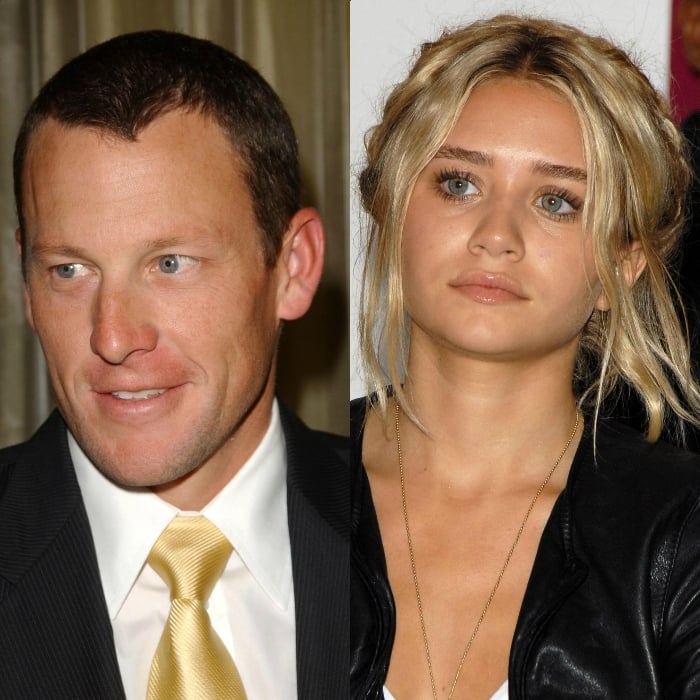 The 27-year-old Olsen twins clearly don’t mind a large age difference when it comes to the men they date. Mary-Kate Olsen recently got engaged to her much older man, Olivier Sarkozy, 44, and it was recently revealed that her twin sister, Ashley, is now reportedly dating 47-year-old Moneyball director Bennett Miller.

Although Mary-Kate has been with Sarkozy for a couple years, Ashley’s dating life has been a little more tumultuous. Before Miller, the fashion designer was linked to several other influential older men, including professional cyclist Lance Armstrong, 42, whose career was destroyed after he admitted to using performance enhancing drugs.

Lance Armstrong and Ashley Olsen started dating back in 2007 after he split from designer Tory Burch; the former celebrity couple was seen cuddling and making out at a bar before leaving together at 2 a.m. However, according to a new tell-all book about Lance Armstrong by journalist Juliet Macur, the celebrity couple’s May-December relationship was cut short because of their 15-year age difference.

Macur writes that Armstrong’s friends and handlers weren’t on board with his new fling, especially because of the large age difference, and worried that it would hurt his career. John Korioth, who heads Armstrong’s Livestrong Foundation, supposedly “warned the 36-year-old father of three that his May-December romance could damage his cancer work.” Korioth reportedly told Armstrong that it was a bad idea to date Olsen, who was only 21 going on 22, and to put a stop to the May-December relationship right away.

Armstrong ignored the dating advice at first, but the celebrity couple, not surprisingly, did split shortly after that first steamy date. While Ashley Olsen is still playing the dating game with older men, Armstrong has since settled down with Anna Hansen, a 32-year-old woman he met through his charity work. They’ve been together since 2008 and have two kids together.

What do you think: Who should Ashley Olsen date next?