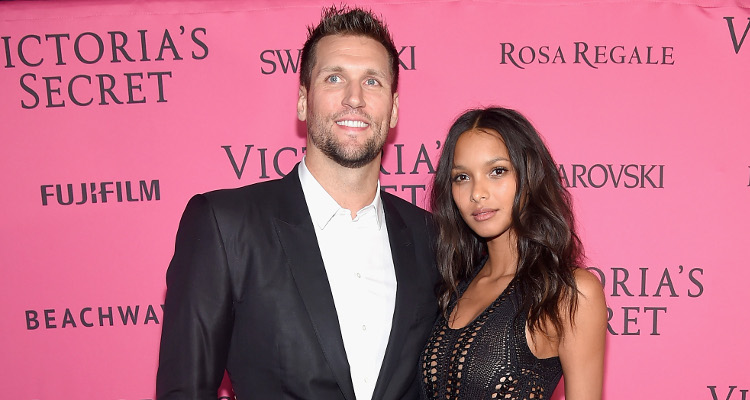 Lais Ribeiro has long been an “angel” in the making. And now, the Victoria’s Secret Angel has been chosen to wear the ‘Champagne Nights Fantasy Bra’ at the 2017 Victoria’s Secret Fashion Show! But who’s the lucky guy who gets to take her home? Learn all about her beloved, basketballer boyfriend, right here!

The Brazilian beauty is one lucky Angel! She has been chosen to wear the $2.0 million ‘Champagne Nights Fantasy Bra’ at the biggest fashion event of the year, the Victoria’s Secret Fashion Show in Shanghai.

Ribeiro is following in the high heeled footsteps of Angels like Heidi Klum, Alessandra Ambrosio, and Gisele Bundchen. It’s a dream come true for Ribeiro, an Angel who many men out there dream about!

But who is Lais Ribeiro dating? Find out all about the lucky man who gets to call himself Lais Ribeiro’s boyfriend in 2017, right here.

So, Who’s the Lucky Guy?

His name is Jared William Homan and there’s no denying many men would like to be in his shoes. Not only because he’s an accomplished basketball player, but also because he’s Lais Ribeiro’s boyfriend! The Iowa native played for the Maccabi Ashdod in the Israeli Premier League.

The Iowa State graduate is not as famous back home, but has caught the eye of NBA scouts. Known to play as a power forward and occasionally a center, Homan built a reputation for putting his entire body into the game. He’s famous for rugged and physical play during games.

Homan started his professional career playing for the Greek club, Maroussi, in 2009. The following year, he signed with Virtus Bologna, but was waived off for allegedly punching the coach.

In 2011, Homan signed with Bayern Munich and then with Spartak Saint Petersburg in 2013. He then played for the Turkish team, Eskişehir Basket, a year later.

The 34-year-old is also a member of the senior men’s Bulgarian national team.

Happy Birthday to this captivating woman. You have captured my heart since we first met and we haven't looked back. Things just tend to be better with you by my side. I love you and can't wait until you get here so we can celebrate!

Homan doesn’t shy away from showing his love for his girlfriend on Instagram, either. And really, who can blame the guy! After all, she is Lais Ribeiro!

He’s ecstatic about Ribeiro being chosen for the highest honor an Angel could get. His Instagram post after the big announcement shows how proud he is of his girlfriend.

Congratulations to this beauty on earning the coveted fantasy bra. Years of hard work and honing your craft has paid off. So well deserved as you are the anchor of support to so many people and have stayed true to yourself on this journey. Well done and here is to your continued success. Love you!

Before Homan, Ribeiro dated supermodel, Adrian Cardoso. The Spanish hunk has been published in magazines like GQ, Esquire, and L’Officiel Hommes all over the world, and modeled for brands like Hugo Boss and Diesel, among many others.

The 27-year-old dated Cardoso for three years from 2012 to 2015. He’s reportedly a year younger than her. Shortly after their breakup, she earned her wings and became an official VS model in 2015.

Perhaps no other male can have as much precedence in her life than her son, Alexandre Ribeiro. The model was 19 when she gave birth to him. His father is not known, and it appears that she’s raising him by herself.

Soon after Alexandre was born, a friend encouraged Ribeiro to model. And soon enough, she was walking on the biggest runways in the world!

Being a mother doesn’t stop this supermodel! If anything, her son is her biggest motivation.

“My son motivates me a lot. Because I don’t want to wake up and he just jumps on me and I have to be up,” said Ribeiro.

Lais Ribeiro is a doting mom, and little Alexandre often gets to hang out with her at photoshoots.

When it's bring your son to work day ??❤ #StillMyBaby